Clean power stocks have weathered the coronavirus crisis better than their peers in oil and gas, new research has shown, as the oil price shock and pandemic shift the landscape for energy investing.

US clean power stocks rose 2.2 per cent in the first four months of the year, while their fossil fuel peers fell 40.5 per cent, according to a study by Imperial College London and the International Energy Agency. The S&P 500 fell 9.4 per cent during the same period.

“We found that renewable power had a bit of a protective property, and that is something we did not know before,” said Milica Fomicov, a researcher at Imperial and one of the report’s authors. “After this kind of shock [in the market], this portfolio has done so well.”

The study, which looked at 19 clean power companies and 163 fossil fuel groups, found that the clean power stocks generated higher returns over the past 10 years, five years and this year.

The clean power and fossil fuel stocks were highly volatile, however, exceeding the volatility of the S&P 500 between January 1 and April 30.

The global energy industry is facing the twin challenges of the oil price shock and the plunge in demand for oil and power. Investment in the sector is set to drop $400bn this year, its biggest ever fall. 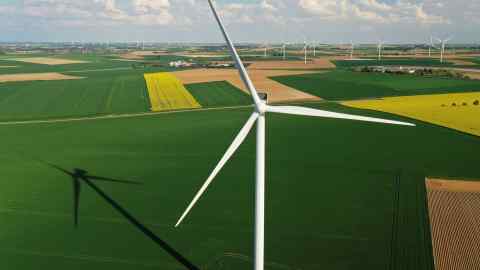 Clean energy is the only part of the industry in which newly installed capacity will grow this year, the IEA has said, although construction of some wind and solar projects has been delayed.

With most clean energy projects owned by governments or unlisted groups, only a small portion of the sector is accessible through publicly traded companies.

The new report suggests that those listed companies, while small in number, have performed better than previously assumed.

“There is a conventional wisdom that . . . renewable power is great for the planet but if you are interested in making money, fossil fuels are the way to go. But what this study shows is, the conventional wisdom in wrong,” said Charles Donovan, head of the Centre for Climate Finance and Investment at Imperial College Business School and lead author of the report.

However, he added that the small market capitalisation of many clean energy companies meant it was still difficult for some large investors to get into the sector.

“If you wake up as an investor tomorrow and decide, we really want to provide our clients with exposure to this clean growth story, there is not a good way to do that today in the listed markets,” he said. “You don’t have the right size of companies, the right number of companies.”

The report also analysed UK clean power companies such as John Laing and Ceres Power, and found that they had also outperformed peers such as BP and Tullow over the past five years. There was not enough data to make a conclusion about the 10-year performance.