Accessibility helpSkip to navigationSkip to contentSkip to footer
US politics & policy

Robert O’Brien, Donald Trump’s national security adviser, has tested positive for coronavirus, making him the highest-ranking official in the White House to contract the disease.

“He has mild symptoms and has been self-isolating and working from a secure location off site,” the White House said in a statement.

White House and National Security Council officials declined to say when Mr O’Brien last met Mr Trump, but insisted there was “no risk of exposure” to the president or vice-president.

Mr O’Brien had travelled two weeks earlier to Paris for a three-day meeting with counterparts from the UK, Germany, Italy and France, where the group discussed Covid-19 recovery and China, among other topics. The five men were seen during their discussions and posing for photographs in proximity without wearing masks.

An administration official had justified the decision to travel and physically meet, telling Politico before he departed for Europe that it was “more powerful making the case in person. There is no substitute for personal diplomacy. You can’t do that over Skype.”

Mr O’Brien’s office declined to say when he contracted the disease or was due to emerge from isolation. Bloomberg News reported Mr O’Brien was infected following a family event and had left the office abruptly late last week and was now working from home. Quarantine guidelines suggest self-isolating for a fortnight.

Mr O’Brien has sometimes worn a mask and travelled at times throughout the pandemic, including to Miami earlier this month on a trip with Mr Trump, their last public appearance together.

He was also in Arizona late last month to deliver a speech warning of China’s global ambitions and its role in covering up the emergence of coronavirus. Both Florida and Arizona are among the US sunbelt states where cases have surged in recent weeks.

US cases have been increasing quickly, with more than 4.2m infections and more than 145,000 deaths. This equates to more than a quarter of global cases and more than a fifth of worldwide deaths, despite the US representing little more than 4 per cent of the world’s population.

Mr Trump has only recently taken to wearing a mask, amid criticism from public health experts that the White House has set the wrong example. 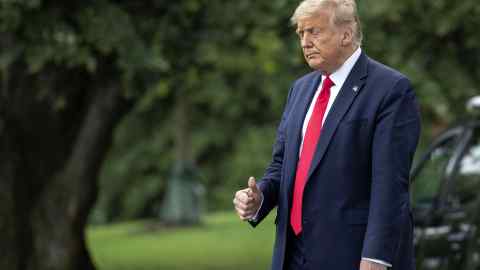 After weeks of playing down the seriousness of the virus, Mr Trump on Thursday cancelled plans to hold the bulk of the Republican party national convention in Jacksonville, Florida, saying it was “not the right time” for a “big crowded convention”, and that he felt it would be “wrong to have people going to what turned out to be a hotspot”.

The surge in cases across some of the most populous US states, including California, Florida and Texas, has also led to a sustained climb in fatalities. On Saturday, the number of deaths across the US increased by more than 1,000 for the fifth day in a row.

Mr O’Brien, previously a Los Angeles-based attorney and hostage envoy at the state department, was tapped last year by Mr Trump to serve as his national security adviser following the tumultuous exit of John Bolton after clashes with the president.