Olga Tokarczuk: ‘It’s time for us to look at Poland’s relationship with the Jews’

Halfway through her fifth novel Flights, Olga Tokarczuk asks her readers to take pity on the poor souls for whom English is their “real language”. “Just imagine!” teases Poland’s most widely translated female author. “They don’t have anything to fall back on or turn to in moments of doubt. How lost they must feel in the world, where all instructions, all the lyrics of the stupidest possible songs, all the excruciating pamphlets and brochures — even the buttons in the lift! — are in their private language . . . they are accessible to everyone and everything!”

It’s a typically provocative and witty inversion from the leftwing humanist, who today tells me that Polish intellectuals have been strangely “relieved” by America’s election of Donald Trump and Britain’s vote for Brexit. “It is reassuring for them to know that populist movements are everywhere. They feel better for knowing that other countries can be naive too.”

Although Tokarczuk (pronounced “Tok-ar-chook”) is in London to celebrate Flights making the long list for the Man International Booker Prize, she feels “conversationally jet-lagged” discussing it because it was published in Poland back in 2007, quickly gaining popularity across the continent. It has taken a decade for the novel to make it into English, superbly rendered by American translator Jennifer Croft.

At 56, Tokarczuk is an invigorating presence: her black dreadlocks studded with bright blue beads, eyes rimmed with luminous turquoise. “Flights grew out of a time when I was travelling a lot,” she explains, at pains to stress how liberating this was for those raised under an oppressive communist regime. “I got my first passport in 1989, when I was 28. Wow.”

The daughter of two literature teachers, little Olga grew up near the border with Czechoslovakia, hiding under tables to eavesdrop on adult conversations. As a teenager she was gripped by Freud, then Jung, thrilled by the discovery that “every tiny thing you did had a deeper meaning . . . those ideas turned the world into a book I could read.”

She trained and practised as a clinical psychologist but quit after realising that she was “much more neurotic than my clients” to become a full-time writer, on a mission to use language “like a fork and knife when you have to eat reality”. As her international reputation grew, so did her air-mile count.

Tokarczuk composed Flights as a “constellation novel”: a postmodern mosaic of meditations on all things in motion from travel-sized toiletries to the blood pumping through the human heart. National, emotional and temporal boundaries are crossed. Thoughts from a semi-autobiographical narrator link the fictional mystery of a man whose wife and son vanish on holiday, the historically accurate accounts of Chopin’s friends smuggling his heart back to Poland and the popular legend of Philippo Verheyen, the Flemish anatomist rumoured to have dissected his own amputated leg. 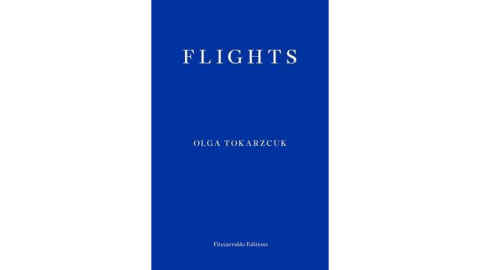 The blurring of fact and fiction is intentional. Tokarczuk tells me she is often asked “Why we central Europeans don’t use a classical linear narrative, and my answer is that we don’t have such a history. Our perception is different. Poland was once a powerful imperial country that disappeared from maps of Europe for more than 100 years. It was partitioned and occupied by the Nazis and the Russians . . . We pop up and disappear and we do not trust what we are told to believe.”

Tokarczuk felt this rejection of facts at first-hand when the Polish publication of her 2015 novel The Books of Jacob led to death threats from nationalists. Her 900-page “magnum opus” tells the true story of 18th-century Polish-Jewish religious leader Jakub Frank, who converted thousands of Orthodox Jews to a kind of Christianity that saw them condemned and persecuted for heresy.

“I opened a history that was taboo from a number of perspectives: it was swept under the carpet by Catholics, Jews and communists. It took me eight years to research such fragile and contentious facts,” she says, “But after I won the Nike Award [Poland’s most prestigious literary prize], I was attacked by people who didn’t want to know about Poland’s dark past.” She sighs.

“Polish culture has always had a strong anti-Semitic undercurrent. There has been awful persecution. But it is time for us to look at Poland’s relationship with the Jews, to accept that we have Jewish blood and Polish culture mixed with our own. I was surprised by the anger I provoked, but thrilled by the enormous support that followed. It seems society is divided between the people who can read and those who cannot!”

Tokarczuk dismisses the global rise of nationalist movements as “the death throes of an outdated ideology. These old ideas of the state are completely disappearing,” she laughs. “People are migrating, travelling. Economics and the internet do not respect borders. We travel between different network providers! Welcome to EE!” She taps her phone with glee. “You could read Flights as an elegy for the old Europe.”