Despite progress, more must be done to reduce greenhouse emissions of modern aircraft

The aviation industry is one of the most visible contributors to climate change. Anyone looking up at a blue sky after a plane has flown by will see its white trail — water vapour mixed with carbon dioxide, sulphur and nitrogen oxides and metal particles, all those things scientists worry about.

The industry wants to capitalise on global growth — passenger capacity has grown by 5-8 per cent each year since 2013. But it also needs to pull its weight on the world’s environmental agenda. Luckily for aviation, its interest in using less fuel to save money coincides with that of environmentalists, driving innovation to please both.

Flight is not the most damaging mode of transport for greenhouse gas emissions. The UN’s International Panel on Climate Change has estimated that civil aviation accounts for 2 per cent of all global man-made carbon dioxide emissions, far behind that created by road transport.

In its 2017 update on the transport sector, the International Energy Agency welcomed recent annual average fuel efficiency improvements of 3.7 per cent in the aviation sector.

But the body noted that “with few alternatives to fossil fuels, aircraft efficiency needs to continue to improve at a rapid rate”. It also added that more substitution of biofuels for fossil fuels would be needed to help prevent a catastrophic increase in world temperatures of 2 degrees in the coming decades.

Reducing the weight of aircraft — every part of it — is an obvious place for engine-makers such as Rolls-Royce and GE and aerospace manufacturers including Boeing and Airbus to start.

In the engine itself, carbon fibre composite materials make fan blades and the fan case much lighter, and 3D printing of parts has proved promising too. Composite materials also allow slimmer seats — which means more seats and more passengers. Aluminium wire could replace traditional copper used in construction, saving up to 60 per cent of the 1,200kg of cabling on a single-aisle jet. Even the windows are up for grabs if they are scrapped and replaced by displays of soothing scenes.

Sean Newsum, director of environmental strategy at Boeing, says the airline industry knows how to get the best out of its aircraft, including by increasing occupancy, which has risen from 74 per cent in 2003 to 82 per cent in 2017. But technical design matters especially: “Each generation of aeroplanes we’ve developed has been 15-20 per cent [more fuel efficient] than the prior generation.”

This is why airlines buy new planes, says József Váradi, chief executive of Hungary’s low-cost Wizz Air, which has the youngest fleet of any European carrier. He adds that Wizz has “around 30 different fuel[-saving] initiatives”, such as using only one engine when a plane is taxiing.

Pilot behaviour can be as important as engineering innovation and flight data. Airbus’s Mr Lange says his company’s software records 300,000 types of data during a flight, which can then be used to make a pilot more fuel-efficient. One example: “We can monitor flight operations and determine at what point in the descent the landing gear go down. If they’re being put down too early, then the aircraft is burning more fuel than it needs to.” This is fed back to airlines, which can change pilots’ procedures.

Honeywell, a US engineering conglomerate, has created GoDirect Flight Efficiency analytics software which can draw in millions of data points during a flight to work out when fuel is being used inefficiently.

Julie Vasquez of Honeywell says airlines sometimes tell their pilots to “throttle it” to arrive at an airport as quickly as possible, which is operationally sensible “but it’s actually not necessary if they’re able to achieve efficiency, to drill down on where they’re having challenges with on-time performance”.

There are, of course, environmental campaigners who think the aviation industry’s current model and keen growth are inherently inimical to any kind of energy reduction. Doug Parr, chief scientist at Greenpeace UK, says: “The core problem for aviation is that it is currently fossil-fuel intensive and there’s no real alternative technology.” His hope is that electric planes will at some point arrive, but these are many years off.

And he is sceptical even of current mitigation attempts: “A lot of the industry’s efforts are greenwash, making a lot of noise about peripheral issues while their overall emissions increase.” He refers to the International Civil Aviation Organization’s offsetting scheme, which has global support but is only voluntary until 2027. “Aviation is decades behind other industries in its response to climate change,” he says. 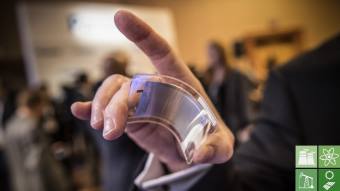 Part 6/6: The economic and investment challenge of climate change
Governments and businesses must mobilise trillions of dollars of investment to achieve shifts in energy use to cope with rising demand and curb carbon emissions.
Previous instalments, examining how new technologies and environmental concerns are transforming the balance of energy production and consumption, can be viewed by scrolling down this page.
Supported by Mitsubishi Heavy Industries Group