Dealmaking has decelerated rapidly from the record pace seen at the start of 2018, with the final three months of this year poised to be the quietest period for mergers and acquisitions since the third quarter of 2017.

Companies have agreed deals worth $761bn since the start of October, down more than 25 per cent from the first and second quarters, when a blistering $1.2tn worth of transactions were struck in each period, according to the data provider Refinitiv.

The slowdown follows a turbulent period in global stock markets. “If we don’t get more stability, there is a good chance that even fewer deals will be announced in 2019,” said Scott Barshay, a corporate lawyer at Paul, Weiss.

Only one deal worth more than $20bn was agreed in the fourth quarter and of the 20 largest transactions of 2018, just two have been clinched since October, including IBM’s $32bn takeover of cloud computing group Red Hat.

Several advisers said the recent market turbulence could make it difficult for buyers and sellers to come to an agreement on price when attempting to strike a deal. Bidders have already cut their offers in several live auctions, using the recent share price drops as a justification. Boards have so far been reluctant to accept the lower offers, given the all-time highs hit by global stocks in September.

While several bankers and lawyers who spoke to the Financial Times said they expected a slowdown in dealmaking, several offered the caveat that the deceleration would be temporary and that companies continued to evaluate transformational acquisitions.

“The M&A cycle still has room to grow,” said Robin Rankin, co-head of global M&A at Credit Suisse. “A lot of people are making moves. When they do, they are more focused on larger-scale transactions that move the needle. To me, this signals more confidence and a desire to really change portfolios.”

This year had a wave of deals that fit that mould, with companies such as General Electric, United Technologies, Comcast, Vodafone, Keurig Green Mountain and Broadcom reshaping themselves through multibillion-dollar transactions. The challenge for many companies was regulatory roadblocks in Washington, Brussels and Beijing.

Hernan Cristerna, co-head of global M&A at JPMorgan Chase, noted that regulatory hurdles were “generating board room uncertainty when it comes to pursuing transformational deals”.

An intensifying trade war between the US and China has only added to the pressure building against corporate Chinese acquisitions between the countries in 2018.

While Chinese companies agreed to $182bn worth of cross-border deals this year, up 17 per cent from 2017, takeovers of US groups slid 15 per cent.

Overall activity remains below the record activity seen in 2016, when $258bn of cross-border deals involving a Chinese group were clinched. Part of the slowdown is a result of China’s crackdown on aggressive overseas deal makers such as HNA, Dalian Wanda and Anbang, an effort that has gathered momentum since early 2017.

But more hawkish national security policy in the west has helped to turn away Chinese buyers from developed markets. Chinese M&A into the US fell to $9.3bn, with the number of deals off by a quarter, according to Refinitiv.

“The landscape is definitely changing. We are seeing fewer outbound Chinese deals,” James Tam, head of Asia-Pacific M&A at Morgan Stanley. “But for something that is strategic in nature in a less sensitive industry you can still get things done with careful execution.”

Underlying the trade dispute between the world’s two largest economies is what the US perceives as a strengthened effort by China to become the world leader in high technology and valuable high-end manufacturing, often through purchases of foreign intellectual property.

Due Diligence
After almost $18tn in deals over the past five years, what comes next? Premium 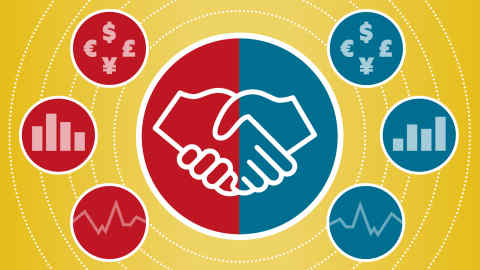 The reaction has been to block more deals on national security grounds — such as Ant Financial’s $1.1bn offer for MoneyGram — and bolster government checks on inbound investment. A law passed in August will give the Committee on Foreign Investment in the US sweeping review powers over even small minority stake purchases in American companies, following record Chinese venture capital activity in the US in the first half of the year.

But the pushback against Chinese M&A is not limited to the US.

“It’s more of a global phenomenon where globalisation and easy access to markets is becoming more difficult,” said Greg Peirce, head of M&A for Asia Pacific at UBS.

China has also sought to exercise its powers to block global deals, most notably Qualcomm‘s $44bn acquisition of NXP Semiconductors.

“On the structuring side, people will be very careful with how they invest in the US and EU,” said Philip Li, a partner at Freshfields. “But there is still lots of willingness and interest in overseas investment, especially in the UK where prices are low.”

Global mergers and acquisition activity was driven by mega deals in 2018, as corporate boardrooms around the world made big bets in an effort to boost revenue growth and better compete against a new tide of digital disrupters across all industries.

Transactions worth more than $5bn rose 70 per cent to about $1.5tn, according to Refinitiv, representing about 40 per cent of overall volumes in 2018. Deals with a price tag higher than $10bn rose from 28 transactions in 2017 to more than 40 this year, including the $77bn acquisition of the Irish drugmaker Shire by its Japanese rival Takeda, and Comcast’s $48bn takeover of the UK broadcaster Sky.

Steve Arcano, a corporate lawyer at Skadden, highlighted technology as an impetus. “C-suite executives see a need to realign or adjust their platforms to adapt to rapidly evolving markets in this disruptive world, and they are willing to do significant transactions to address this,” he said

The total number of deals in 2018 dropped almost 10 per cent to just under 44,000 transactions compared with a year ago, according to Refinitiv. The biggest drop was in smaller deals under a $1bn, which are often considered to be the bread and butter for investment banks advising on M&A.

If completed, those transactions would cap a frenetic pace of dealmaking this year, which included Blackstone’s $17bn takeover of Thomson Reuters’ financial data business.

In total, leveraged buyouts worth almost $384bn were agreed in 2018, up 28 per cent from a year previously. Leveraged buyouts have crossed the $400bn mark only twice before in history: in 2006 and 2007 before the financial crisis.

“This has been a record year in all respects; sponsors have raised significant amounts of new capital and have been very active in both buying and exiting portfolio companies,” said Rob Pulford, Goldman Sachs’ head of financial and strategic investors group for Europe, the Middle East and Africa.

David Higgins, partner at Kirkland & Ellis, said: “Some uncertainty in the markets may also help PE funds as they search for value opportunities. We think that take-private transactions will increase as public markets become disconnected from private market valuations.”

The level of dealmaking in the new year will in part depend on the ability of private equity groups to secure financing for their transactions. Recent market volatility and higher interest rates have lifted borrowing costs and banks have been wary to underwrite massive cheques.

What is more, private equity groups have started to factor in a recession over the next few years into their forecasts when contemplating buyouts.

Yet buyout groups are sitting on almost $1.2tn of dry powder — money they have raised but have yet to invest — with three of the largest funds on record finalised over the past 20 months, separate data from Preqin showed.

“Next year I expect to see more carve-outs and public-to-private deals because public markets have come down in their valuations and that presents an opportunity,” said Simona Maellare, the global head of financial sponsors at UBS.