Commuters on the Brussels metro are familiar with endless adverts for banks, bargains and chocolate. They are less accustomed to posters accusing the European Commission of picking on hairdressers.

The posters, with the tagline “Better Regulation — it really isn’t,” were part of a campaign last year by trade unions. They warned that an effort by the commission to streamline regulatory burdens on business, and toughen the screening of proposed laws, should not come at the expense of workers’ rights.

While the episode is in fact only tangentially linked to the EU executive’s “better regulation” agenda, the campaign is just one example of the suspicions that can spring up around bids to improve lawmaking.

Jean-Claude Juncker, the commission president, emphasised at the start of his mandate in 2014 that he was determined to deliver an EU that “is more focused, credible and relevant for the citizen and the companies”.

In its first months in office, the commission announced it was withdrawing or amending some 80 proposals for EU legislation that had been put on the table in recent years. Brussels added it was introducing policies to increase public consultations and toughen “impact assessments” of its policy plans.

Another major change has been a restructuring of bureaucratic procedures so that proposals are more thoroughly vetted before they are sent for final approval by the EU executive’s ruling college of 28 commissioners who are drawn from member states.

Frans Timmermans, first vice-president of the commission since 2014, enjoys sweeping power to review all proposals across different policy departments in Brussels.

The former Dutch foreign minister says the tougher stance on new regulations — and the review of existing rules — is starting to bear fruit. “Over the past two years, we have worked hard to embed better regulation into the DNA of the European Commission,” he told the FT. “We have now installed a priority-driven, evidence-based and disciplined policy process. This is about being open in our policymaking, about consulting our citizens and businesses, and by being transparent in the decisions we take.” 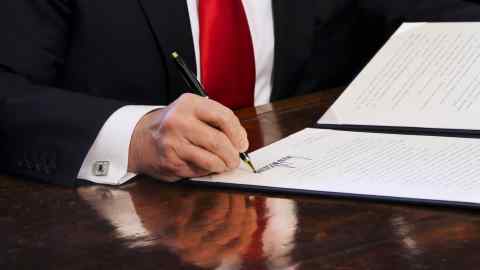 He accepts this approach has created a “political discontinuity” with how the commission has functioned before. “The bottom line is whatever we do has got to address the real challenges in people’s daily lives and only where member states can’t cope alone. And it has got to address them effectively and efficiently,” he adds.

One upshot has been a dramatic fall in the number of initiatives that the commission proposes. The institution’s 2015 work programme contained 23 new proposals, compared with around 100 in 2014, under the previous commission headed by José Manuel Barroso. In parallel, an expert panel has been set up to review hundreds of existing laws.

Despite the commission’s insistence that the “better regulation” drive is good for all, the initiative has been divisive. The effort has received a much warmer welcome from business groups than from unions.

Citizens across Europe expect the European Union to change

For Erik Berggren, a senior adviser at employers’ federation BusinessEurope, the initiative is “a push for transparency, for objective evidence-based policymaking,” he says. “The problem is that it becomes politically polarised — it is falsely assumed to be deregulation.”

Nevertheless, officials have acknowledged that the better regulation agenda has faced some internal resistance. A clear target of the initiative is to make it harder for commission officials to push pet projects, not least by requiring a much higher burden of proof that action is needed at EU level. Mr Timmermans has said that the commission’s mantra should be “ambitious where we must, and modest wherever we can”.

An early target for scrutiny by the new commission was the EU’s work to set so-called eco-design standards for household products — a policy agenda that had already led to a ban on incandescent lightbulbs, and wattage limits on vacuum cleaners.

Rules capping power ratings for vacuum cleaners became a bête noire in the UK, where some politicians and newspapers cited it as an example of unnecessary Brussels meddling. The initiative survived despite such complaints.

The commission also came under fire last year for a muddle over draft plans that campaigners said would weaken a previously agreed ban on mobile phone roaming charges in Europe.

Mr Juncker said that the proposals were the work of a “well-meaning official” who had “missed the point of what was promised” to consumers. Still, this unintended consequence was noticed only thanks to new procedures opening up draft technical rules to public scrutiny, enabling policy blunders to be caught.

Mr Timmermans, reviewing progress in September, said there could be no going back to old approaches. “We have worked hard to change and to break with the past,” he said. “Citizens across Europe expect the European Union to change.

Hairdressers’ health and safety is no small thing / From Oliver Roethig, Brussels, Belgium