When Vui Nyugen, a Vietnam-born Roman Catholic religious sister, makes her regular pastoral visits to Vietnamese people in UK immigration detention centres, she hears the same story repeatedly. The migrants, many under 18, tell of the terror of being smuggled into the UK in trucks, struggling to breathe — and often bitterly cold from the vehicle’s refrigeration.

“I think often they know it’s a very, very dangerous journey but they have no choice,” Sister Vui said. “They had no choice because the smugglers forced them.”

Academic studies estimate the number of Vietnamese people living clandestinely in the UK could be as high as 20,000 with many smuggled in with the promise of work in nail bars or restaurants or trafficked to work in cannabis factories or as prostitutes.

On Wednesday the Pew Research Center said the number of unauthorised people living in the UK could be between 800,000 and 1.2m.

The pressure to track and control the flow has surged after 39 Vietnamese migrants — two aged just 15 — were found dead in a refrigerated truck in Essex, near London, on October 23.

Yet, according to Sister Vui and other charity workers, campaigners and enforcement officials, the scale and pattern of the problem should have been obvious.

Diep Vuong, chief executive of the Pacific Links Foundation, a California-based charity that works to empower people in Vietnam, said the UK had for years been a lucrative people-smuggling destination.

The trade took hold, Ms Vuong said, because cannabis fetched a higher price in the UK than elsewhere in Europe. Estimates show most migrants from Vietnam head to other Asian countries such as Malaysia, Taiwan and South Korea. However, Ms Vuong said the UK’s reputation as a wealthy but tolerant society meant some Vietnamese families would pay big sums to have a child smuggled to the UK. Studies have found families pay up to £33,000 each.

Vietnam last year accounted for 702 referrals to the National Referral Mechanism, the UK’s process for identifying victims of modern slavery — 13 per cent of all referrals of foreign nationals and more than any foreign country except Albania. Vietnam was the leading foreign source of referrals of minors, with 320 of those referred under 18.

“It’s really sad what has happened,” Ms Vuong said of the Essex tragedy. “But this should not be news to anybody.”

The question is whether the worst such mass death in the UK since 2000 — when 58 Chinese migrants died in a truck near Dover — will prompt a rethink of the UK’s policy of largely barring legal, low-skilled migrants from outside Europe.

Essex Police last week named the victims, saying 10 were under 20 and another 13 in their 20s. Mo Robinson, 25, from Northern Ireland, faces 39 counts of manslaughter, along with charges of conspiracy to traffic people and to assist unlawful immigration. Eamonn Harrison, 22, also from Northern Ireland, faces possible extradition from the Irish Republic to face similar charges. 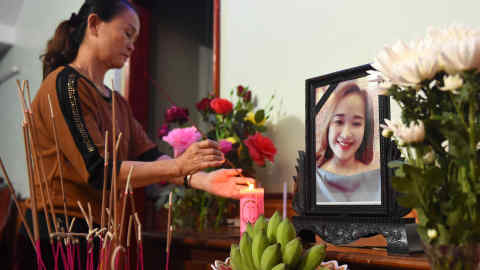 Kevin Hyland, the UK’s former anti-slavery commissioner, said that, until recently, enforcement officials and government departments had not even collated their information on clandestine migration from Vietnam. When his office started work on a report, published in 2017, detailing the treatment of Vietnamese migrants, he said it was “blatantly obvious” intelligence on the trade was lying unexamined in government files.

The area is one of many where the UK’s enforcement of rules against labour abuse faces criticism for being under-resourced and lacklustre.

The smuggling and trafficking reflect complex social factors. Sister Vui, who visits migrants as a volunteer for the Jesuit Refugee Service, said many detainees she met were trafficked after family members borrowed from people smugglers to fund medical treatment such as chemotherapy. The migrants were sent to pay off the debt through their UK earnings.

Border control on its own we know just doesn’t work. The process should be more about encouraging people not to take these dangerous trips in the first place

Lucy Leon, founder of the Rise Project, a project run by the Children’s Society for trafficked boys and young men, whose clients are mainly Vietnamese, said many trafficked boys were orphans or separated from their families. The boys had often grown up on the streets, surviving by begging or shining shoes.

“They will be offered the promise — ‘If you follow me, I’ll be able to help you to find work and education’,” Ms Leon said.

Migrants nevertheless quickly grew “terrified”, she went on, when the traffickers assaulted those who failed to comply with their demands.

“A lot of them have experienced that violence — and sexual abuse, which is used as a means of demeaning them,” Ms Leon said.

Sister Vui said most migrants she met had been effectively imprisoned in cannabis factories. Many arrived in immigration detention awaiting deportation after police treated them as criminals, rather than as the traffickers’ victims. Migrants can be detained for multiple other reasons, including having an asylum claim rejected.

Priti Patel, home secretary, said after the discovery of the Vietnamese migrants in Essex that the government had to be “ruthless” in its response to the “organised criminals” behind people trafficking.

Yet Mr Hyland, a former senior police officer, expressed doubt, like many in the field, that policing was the solution.

“Border control on its own we know just doesn’t work,” he said. “The process should be more about encouraging people not to take these dangerous trips in the first place.”