When asked whether the Singapore government’s handling of the coronavirus pandemic would influence their vote in July’s general election, some locals were unfazed.

“The government did a good job,” said one. “I feel they handled it quite well especially compared to other countries,” said another.

A significant portion of Singapore’s population has benefited from authorities’ pre-emptive planning and effective contact tracing, while businesses were supported by unprecedented stimulus packages and policies that prevented a breakdown of the domestic and regional supply chain.

27 Number of deaths from Covid-19 in Singapore

A daily infection rate of about 20 is allowing Singapore to ease some distancing measures, with more employees returning to their workplaces and introduction of pilot schemes for essential business travel.

However, many of Singapore’s 1m migrant workers have had a different experience, with an outbreak in dormitories that earlier this year pushed the country’s number of infections to one of the highest in south-east Asia. Roughly 90 per cent of Singapore’s 57,786 coronavirus cases have occurred among migrant workers.

“Singapore has attempted to strike a balance between containing the pandemic and trying to minimise the impact to people's lives,” says Hsu Li Yang, associate professor at the National University of Singapore’s school of public health. “Arguably one can say that it has done relatively well even though there were major hiccups. Certainly, the migrant workers’ lives have not been anywhere near normal.”

Early in the year, Singapore seemingly had the virus under control after it imposed border controls, meticulously traced known carriers, tested aggressively and offered a clear public communication strategy.

It also scaled up laboratory capacity for mass testing and began developing its own test kits. This move was seen by experts as critical to containing infections and not overwhelming hospitals.

The availability of intensive care units has contributed to keeping Singapore’s total number of Covid-19 deaths to 27, and there are no patients in ICUs.

The government also sought tech solutions to trace patients’ contacts, to mixed results. In mid-March, Singapore launched TraceTogether, an app that uses Bluetooth technology to record the distance between users and the duration of their encounters. Some 42 per cent of Singapore’s 5.7m population has downloaded it. The city-state is also distributing a free and largely voluntary wearable device to expand digital contact tracing.

Migrant workers living in dormitories, however, must use either the TraceTogether app or the wearable device.

Officials defended their response, saying that they took preventive steps to fight the virus, including closing dormitories’ communal spaces and staggering workers’ meal times and recreation hours. Critics replied that these moves were insufficient, given that distancing is impossible in dormitory rooms of bunk beds that sleep up to 20 people.

Although the number of daily new infections has come down to low double-digits, Singapore has yet to eradicate the virus in dormitories.

Authorities say they are limiting the mixing of workers in these structures and work sites and testing all dormitory residents and workers in sectors such as construction every 14 days. They have also undertaken to build more dormitories and set new standards, including a 10-people-per-room limit.

On the economic front, Singapore offered unprecedented fiscal support to help counter the fallout from the virus and supported hard-hit sectors such as airlines, construction and tourism. It unleashed a package of almost S$100bn — or nearly 20 per cent of GDP — and drew down a record S$52bn from past reserves to fund the plan.

But the pandemic has pushed Singapore’s small, open economy into recession. The Ministry of Trade and Industry (MTI) forecasts 2020 gross domestic product to shrink between 5 and 7 per cent year-on-year.

“The Singapore economy is going through its most severe downturn since independence,” said Ravi Menon, managing director at the Monetary Authority of Singapore — the country’s de facto central bank — earlier this year.

But the city-state — a critical node for global trade — has succeeded in avoiding a breakdown of supply chains. “Singapore’s definition of essential services was broad, allowing key players in the manufacturing supply chain to operate [during the lockdown]. Singapore’s strategy . . . has softened the blow and strengthened its position,” says Chua Hak Bin, senior economist at Maybank, adding that exports and trade have already recovered to pre-pandemic levels.

MTI says that committed investments into Singapore for the next three to five years “remain on track” given Covid-19 does not change the city-state’s characteristics — such as a skilled workforce, its connectivity and Asia’s growth prospects.

But Covid-19 has prompted Singapore to revisit its development goals. MTI says it will support businesses in sectors such as biomedical sciences, electronics and precision engineering as well as strengthen the aerospace industry to meet longer-term demand.

“We are cognisant that we are not returning to a pre-Covid world and there is the urgent need for Singapore to adapt to thrive in a Covid-19 world,” says the MTI. 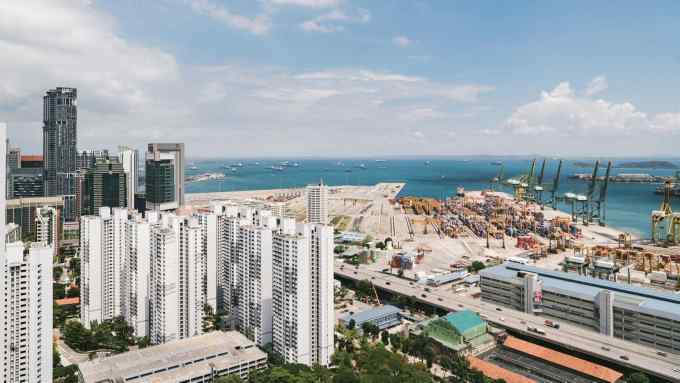