Luxembourg: a quiet haven where expats find themselves at home

Any financial industry executive weighing up the prospects of relocating from London to Luxembourg will find one aspect of life in the grand duchy extremely familiar — the high expense of accommodation.

The cost of houses and apartments in the capital may not be as immense as in Knightsbridge or Belgravia but they have been rising consistently over the past 20 years, fuelled by the finance-led expansion of the economy. Alternatives in outlying towns and villages that used to be much cheaper — such as Niederanven, Kehlen, Strassen and Bertrange — are now not far behind, according to the government’s statistics office.

The average price of a family house across the country was just under €600,000 in the year to the end of June 2016, with the cost of typical apartments ranging from €380,000 to €480,000. Twelve months on, prices are now reckoned to be 4-5 per cent higher and any significant influx of highly paid banking or insurance workers could push housing costs up even faster. A wave of new housing construction has not caught up with demand from a workforce that sucks in almost 200,000 cross-border commuters from France, Belgium and Germany every day.

They, and people travelling to work in the capital from around the grand duchy, commonly experience another unwelcome aspect of big-city life — long lines of rush hour traffic. A planned tram system crossing the capital from north to south should ultimately ease the city’s traffic problem — in the meantime the construction work on major road arteries is adding to the delays.

In other respects, though, many expats in Luxembourg experience a shift towards a far more relaxed lifestyle when they come to the grand duchy from the biggest European and North American cities. This reflects the fact that for all the urbanity of its citizens, Luxembourg City has just over 110,000 inhabitants. 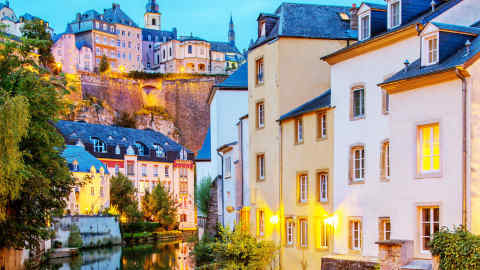 That entails pluses and minuses for the country’s international community. There is simply not the breadth and depth of top-class cultural events found in Paris, Milan or Berlin. Sports are a national enthusiasm but mostly on an amateur and participatory rather than professional level.

But then local and foreign residents of a country covering just 999 sq miles have long exploited the short distances and easy travel connections to cities such as Paris, Amsterdam and London to compensate for any shortage of entertainment and stimulation on the doorstep. A broad swath of western Europe is an easy weekend car trip away.

Many expats, especially those with young children, appreciate the more relaxed pace of life it offers and sense of security not found in many other north European cities. They also say the place has more to it than meets the eye.

There is a common story of families and individuals who arrived for a short stay, only to find themselves in the grand duchy decades later.

“Luxembourg is full of people who came here and never left,” says Olivier Sciales, a lawyer from Belgium who first established his practice specialising in banking and investment funds in the country in 2004. “It is a lot more dynamic than it used to be.”

Another long-term expat is David Schrieberg, a former journalist who came to Luxembourg with his family a decade and a half ago to work for AOL Europe, his employer at the time.

Mr Schrieberg, who has lived in cities including London, Paris, New York and Jerusalem, says: “What I like about Luxembourg is that it is cosmopolitan and international, with 60 per cent foreigners in the capital, and extremely live­able, precisely because of its manageable size. He argues that the country offers a much richer cultural experience than most outsiders would assume. “There’s just enough to keep one engaged, particularly in the diversity of music: classical, jazz and blues. But you can reach almost any major European capital within a couple of hours.”

The diversity of the population — and the fact that the society is a melting pot rather than segregated into national groups — helps too. “There are so many different nationalities among people working in the European institutions, the financial sector, the big four consultancies and other businesses,” Mr Sciales says. “These days we are seeing more people coming from eastern European countries like Poland, Romania and Bulgaria.”

An important factor for families, say these expats, is the growing choice of international schools, coupled with the multilingual capabilities common among Luxembourgers and easily picked up by the children of expatriates.

“The country is very welcoming to members of the international community,” says Mr Schrieberg. “Multilingualism is part of life, but even someone who arrived speaking only English would get along fine in Luxembourg.”

Get alerts on Lifestyle when a new story is published