As the west clamps down on trade with the country, mining conditions in the country are also under scrutiny

Myanmar’s military coup has not only drawn international condemnation from human rights groups and governments but also reignited a debate over the sale and reputation of the country’s most revered jewellery export: Burmese rubies.

Celebrated by gemologists, rubies from Myanmar have historically fetched the highest prices on the global market. It is their deep-red shade — the best examples of which are termed “pigeon’s blood” — that makes them so coveted by collectors, as well as a natural fluorescence that makes the stones appear to glow from within.

In 2015, a Cartier ring set with a 25.59ct cushion-shaped Burmese ruby known as The Sunrise Ruby achieved three world records when it sold for $30.3m at auction house Sotheby’s. Later that year, at another landmark ruby auction, held by Christie’s, a Boghossian ring set with a 15ct Burmese pigeon’s blood ruby — The Crimson Flame Ruby — fetched $18.3m.

“The market for ‘no-heat’ Burmese rubies has been very strong for the past 20 years and the demand is still here,” says Roberto Boghossian, managing partner at jewellery house Boghossian, referring to rubies that haven’t been heat-treated at the mine to enhance colour and clarity. He says there has been a “period of stabilisation” in prices over the past three years but top-quality examples of pigeon’s blood Burmese rubies of more than 5cts continue to “command very strong prices”.

However, the reputation of this much-desired gem could be under threat, as the UK and US impose sanctions on Myanmar, starting with gemstones. The US banned three Myanmar gem dealers — Myanmar Ruby Enterprise, Myanmar Imperial Jade Co, and Cancri (Gems and Jewellery) Co — in February.

This is not the first time the US has levied such sanctions on Myanmar’s gem trade. In 2008, the Jade Act was signed into law to prevent rubies and jade from Myanmar entering the US, either directly or through third-party countries. It was abolished in 2016.

Although rubies lead in prestige, it is mostly jade sold at Myanmar’s auctions which, before they were suspended due to Covid-19, generated revenues of €1bn in 2019, according to press reports.

Many in the gem trade feel the latest sanctions will have little effect on Myanmar’s lucrative gem industry, much of which was controlled by the military long before the coup. “These new measures are limited and targeted, focusing only on individuals and companies who are directly connected to the Myanmar military leaders,” says Boghossian.

However, any fresh measures will most likely affect the locals who depend on artisanal mining to support their families. Kim Rix, author of the Gemstone Detective travel guides, says: “It’s these small businesses that really suffer from lack of confidence in the gem trade. If we stop buying from the small-scale mines, livelihoods are destroyed.”

Myanmar gem traders have a history of operating in the shadows. “For centuries, rough Burmese rubies were smuggled into Thailand and cut and sold as ‘Thai rubies’ on the international market,” says Jayce Wong, creative director of Artisan Atelier, a UK jewellery manufacturing consultancy. “Very often, you will see these gems in international trade shows. Some are marketed as Burmese, some aren’t.”

The countries wielding sanctions against Myanmar also have relatively little purchasing power. The majority of the country’s newly mined gems are sold to China, where demand is high and buyers are willing to pay a premium. At present, China has not opposed the Myanmar coup.

Jason Hirsh, owner of London-based luxury jeweller Hirsh, says the majority of Burmese rubies used by western jewellers, including his own brand, are not newly mined. “When we talk about Burmese stones, they have not been bought [from a miner] in the last 10 or even 20 years,” he says.

Hirsh made a trip to Myanmar at the end of 2019 as part of a group travelling with the International Colored Gemstone Association. Based on what he saw, he chose not to buy gems from the country. “The conditions were so unsafe and dangerous for the people working there,” he recalls.

He describes witnessing miners, wearing no safety clothing, using a rope attached to a moped wheel to pull each other up and down an unventilated mine shaft. “It’s not something that I, as a business, want to support,” he says. While Hirsh will not buy new gems from Myanmar unless mining conditions improve, he will continue to source older Burmese rubies, and he does not believe consumer demand for such gems will diminish because of the coup.

But Philippe Ressigeac, managing director of Ressigeac Gems and a gemologist who has lived among Asian and African artisanal mining communities, including those in Myanmar, disagrees with that prediction. “There is definitely going to be an impact, especially on the western side of the world,” he says. Ressigeac was instrumental in the launch of miner Gemfields’ Mozambique rubies in 2014. These rubies have been embraced by jewellers such as Cartier but remain a less expensive alternative to Burmese rubies. “Most of the luxury groups are going to follow [the situation in Myanmar],” Ressigeac argues.

Some have already opted out. US jeweller Le Vian has banned Burmese gems from its collections for the past 20 years. “Le Vian refuses to sell Burmese rubies . . . until such time as it can be assured that the Burmese government has returned to civilian rule and that the corrupt generals are not involved in the trade of Burmese rubies,” says Eddie Le Vian, chief executive.

Explore the Special Report
READ MORE
Watches and Wonders 2021: Conversation pieces from the shows in Geneva and Shanghai 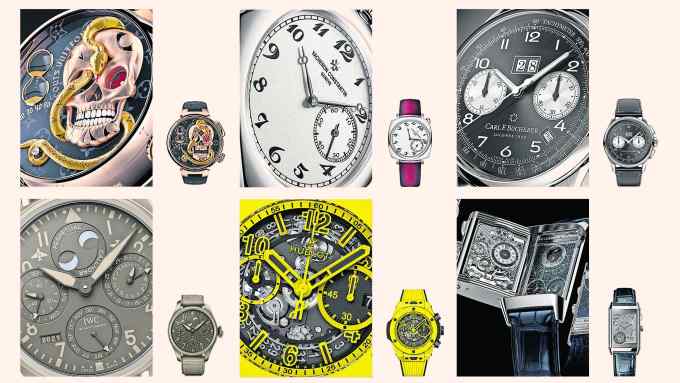