Groups use their flexibility and connections to exploit surging market

Last year, when Isabelle Freidheim was preparing to launch a special purpose acquisition company (Spac) and join the trend for speculative investments that had so captivated Wall Street last year, one of the first people she contacted to raise the money to get started was Candice Beaumont.

The two women had known each other since they started in finance two decades ago. Freidheim was eager to engage Beaumont as an adviser to and investor in Athena Technology Acquisition Corp, an all-women-led Spac that Freidheim had founded. These investment units have been playing a key roles in the wider Spacs boom — due to their flexibility and relationships with other wealthy deal backers. “Right away, I was like, I’d be delighted to help, I’d be delighted to invest, and I’d be delighted to recommend other women to the board,” says Beaumont.

Soon afterwards, Beaumont put up part of the risk capital for Freidheim’s Athena Technology Acquisition Corp vehicle — money that is typically used to fund the sponsor team’s expenses, such as fees, legal advice or staff, as they hunt a target. Beaumont also brought in Kay Koplovitz, a friend and former chief executive of the USA Network cable television company, to the Athena board. In March, the Spac raised $250m in its initial public offering (IPO).

Spacs, which are essentially shell companies set up by their sponsors with the aim of finding a business to acquire and take public through a merger, have boomed during the pandemic. Also known as blank-cheque investment vehicles, they have gone from being largely shunned on Wall Street to raising more than $100bn so far this year, according to Refinitiv, eclipsing the total for 2020.

Family offices have participated in the boom, albeit in smaller numbers than hedge funds and other institutional investors. Among the most prominent names active in the sector are the family offices of tech entrepreneur Michael Dell, billionaire real estate mogul Barry Sternlicht and former hedge fund executive Dan Och. Some billionaires have even set up their own Spacs, with or without family office backing, including former Facebook executive Chamath Palihapitiya and hedge fund manager Bill Ackman. Billionaire financier George Soros’s family office has also begun hunting for Spac opportunities.

The clock starts ticking once a Spac goes public, typically at an IPO price of $10 a share. They normally have two years to complete a merger that shareholders will have to approve. Sponsors often need additional capital to complete the transactions, which are financed through private investments in public equity (Pipes).

Investors have various options to participate. Some, like Beaumont with Athena, contribute to the risk capital for the sponsor — an investment that typically comes in exchange for private placement warrants and gives backers the opportunity to buy shares or warrants, or both, in the combined company later, at a pre-agreed price.

If there is no deal at the end of the countdown and the Spac fails to get shareholders to agree to an extension, the risk-capital investors lose their money.

Investors can also buy units, comprising common shares and warrants, in the Spac at the IPO or acquire shares on the public market once the blank-cheque company starts trading; the latter route has given opportunities to retail investors during the past year. Pipes are another entry point for investors.

Family offices, most obviously, are about relationships, perhaps more so than in other areas of finance. The meeting of minds between Freidheim and Beaumont captures that well — they first met when Freidheim was an analyst at Lehman Brothers, the now-defunct broker, and Beaumont worked at Lazard, the investment boutique.

Since then, both have risen through the ranks on Wall Street. Freidheim joined Invesco’s private equity group after leaving Lehman and later was an investor at venture capital funds The London Fund and MissionOG. In 2018, she founded her own investment firm with a focus on growth tech companies. Beaumont also took the private capital route. After several years in Lazard’s mergers and acquisitions practice, she worked as a private equity principal at hedge fund Argonaut Capital before joining L Investments as CIO in 2013.

With risk capital and IPO investments in a Spac — which require a high level of conviction and trust from investors that a sponsor has the ability to find a lucrative target company to take public — “it comes down to the track record of this team; what have they done before, who are they?” says Alex Chaloff, co-head of investment strategies at Bernstein Private Wealth Management. “In the family office space, which is such a Rolodex universe, it’s really who you know,” he adds.

Family offices also tend to be more flexible with their capital. For some, that means prioritising capital preservation at all cost; for others, it means being more comfortable with taking on riskier bets for potentially higher upside than other asset managers might. But they are not immune to Wall Street trends, and Spacs are just the latest example of that.

“Family offices are largely exempt from registering with the SEC [US Securities and Exchange Commission] and they’ve got a lot of great connections,” says Jane Leung, chief investment officer at Silicon Valley Bank. “They’re able to have a lot more flexibility and nimbleness when it comes to making investments in Spacs.”

The result is a patchwork of family office activity across the blank-cheque vehicle universe. The Dell family office’s Spac, MSD Acquisition Corp, was launched this year, raising $575m in its IPO.

Yet, in recent months, concerns have grown about the health of the Spac market and deal flow has slowed. While Spacs raised more than $93bn in IPO proceeds and an additional $232bn in merger funding in the first quarter of this year alone, those numbers have dipped, with only $7bn in IPO and $109bn in acquisition proceeds in the second quarter, as of May 21, according to Refinitiv data.

Family office investors have not held back in their criticism of sponsors with little dealmaking experience and “frothy” trading. “It’s a lot out of control — if you can walk, you can launch a Spac,” Sternlicht told CNBC in March. “We’ve done over 150 investments in my family office, so we see, we know these people.” He added that, in the Pipes market especially, investor sentiment has shifted, with institutions such as BlackRock and Fidelity putting the brakes on rushed deals and sky-high valuations. For some family offices that are not necessarily eager to launch Spacs themselves, that has created new opportunities.

Dawn Fitzpatrick, chief investment officer of Soros’s private family office, told Bloomberg in March: “When it came to [Spac] Pipes, it was a sellers’ market and you had to take the terms. Now it feels like Pipes are going to get done where the buyers can be smart structurers. We think that could get very interesting when the target company is attractive.”

Public trading of Spacs has cooled, as well. That has caused many Spac shares to trade below the legally protected trust value of the usual $10 plus accrued interest. For investors, including family offices, that has created an arbitrage opportunity, because Spac investors can redeem shares for their fair trust value if there is no deal, or if they do not want to stay invested after the deal. 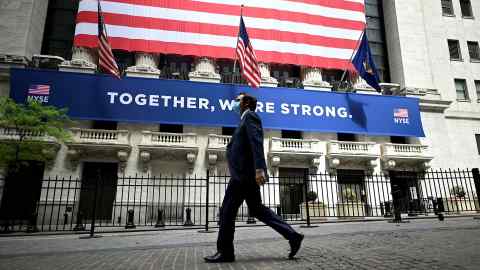 Peter Weprin, an adviser to family office Hemingway Group, says buying Spac shares at or below their IPO price can be a “clever alternative” to regular equity investing in an environment where stocks are expensive and have become more volatile, with some fearing a correction on the horizon. “If the market goes off a cliff, Spacs will be the best ‘performing’ part of a long portfolio because, in essence, you don’t lose a penny, as long as you are pre-merger and you have the time to wait to redeem,” Weprin says.

Alex Band, head of public equities at Partners Capital, which manages portfolios of family offices and institutional investors, says his team is “most active” in arbitrage opportunities with Spacs. “It’s a pretty good investment if you execute it in a disciplined way,” he says.

Athena shares are still trading around their fair-trust value as its sponsor team is hunting for a tech company to acquire, ideally one that shows some alignment with the values of Freidheim and her co-lead Phyllis Newhouse, an entrepreneur and former US army cyber-security specialist.

Freidheim, who is the Spac’s chair, says she assembled her team of advisers and investors — comprising a former SEC commissioner, former chief executives, dealmakers and bankers — on the basis of who would be most helpful and not, as often, most generous with their financial resources.

Beaumont fits in as a highly networked family investor with a strong record of sourcing deals internationally. Global experience has become increasingly important, as US sponsors have looked abroad for targets to avoid competition from the near-500 blank-cheque companies that have launched since the start of 2019 and were still looking for a deal as of late May.

“It’s a very different perspective,” Freidheim says. “So it was important to me to have someone like Candice at the table.”

This article has been amended since publication to say that Isabelle Freidheim was the sole founder of Athena Technology Acquisition Corp, not a co-founder.