The paradox that leads professionals into temptation

Before her first ward-round as a junior doctor, Sunita Sah watched as the consultant leading the group stuffed his pockets with branded pens and notepads from a hospital cart piled with drug company freebies.

Noting her astonishment, he remarked, “these are the only perks of the job”, and continued to stock up. “I couldn’t help but think: ‘What’s the end-effect of this?’” Sah told me.

She found part of the answer to that question when she moved from medicine into management consulting and started analysing how every interaction between healthcare companies and doctors had an impact on their prescribing habits.

Now a professor at Cornell University and an honorary fellow at Cambridge’s Judge Business School, Sah has filled in more gaps with a new study that sheds light on the dark side of professionalism and how to avoid it.

Her findings are stark and surprising. The greater a manager’s sense of professionalism, the more likely he or she is to accept a gift or bribe. Worse, high-minded professionals may be more susceptible to unconscious bias towards gift-givers, precisely because they are convinced they think they know how to ignore their blandishments.

“I NEVER turn down something for free that I know isn’t going to kill me!” retorted one manager in response to Sah’s survey. “A free lunch from someone? Go for it! If the guy is fool enough to think his free lunch/dinner/use of cabin, etc, is going to influence me, he doesn’t know me at all! People don’t influence me beyond what I, and I alone, allow!”

In the study for the Academy of Management Perspectives, Sah equates this “professionalism paradox” to the Dunning-Kruger effect, according to which poor performers lack even the ability to recognise their own hopelessness.

Sah’s study is based on surveys of managers, but some of the pernicious real-world effects of her paradox are clear. In the extreme case of the opioid epidemic, books such as Empire of Pain and Dopesick (now also a television series) have chronicled the way respected physicians were dragged into the overprescription of painkillers after receiving free gifts and conference invitations from manufacturer Purdue Pharma.

FT Magazine
Wall Street, bribery and an opioid epidemic: the inside story of a disgraced drugmaker 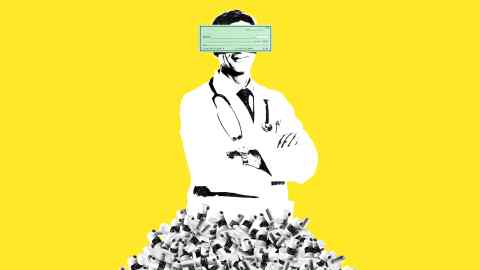 Yet their ability to self-regulate against conflicts of interest is still many professionals’ first line of defence when watchdogs and legislators start threatening to curb their autonomy with new rules.

One problem is that we are all professionals now. The term used to be almost the exclusive domain of lawyers, doctors, teachers, accountants, and others who had laboriously acquired specialist knowledge, shown integrity, and deserved an elevated status. Now the same status is loosely claimed by everyone from salespeople to, yes, journalists. The currency has been debased.

In law, behaving professionally and ethically is “part of your training, it’s part of your identity, it’s what makes you tick — which isn’t necessarily true elsewhere”, David Morley, former senior partner at Allen & Overy, says. But the head of a professional services firm adds that professionalism “can’t be an excuse or a cover story” for a lack of underlying principles.

These senior leaders are describing the difference between what Sah calls “deep” and “shallow” professionalism.

Deep professionals should recognise the risk of undue influence and avoid exposing themselves to it in the first place. Her parallel is Odysseus having himself tied to the mast to avoid falling for the sirens’ song, or, more prosaically, managers who decline all gifts, rather than relying on a corporate threshold to protect them. It is “easier for individuals to rationalise and morally disengage the acceptance of [small] gifts”, Sah writes, or even to stop noticing them altogether.

Deep professionals should embrace continued ethical training, to help embed principles, and embrace an understanding that they may be prone to bribes and influence-seeking. They should also continue to practise their values, just as a concert pianist goes on rehearsing scales.

Professionalism “isn’t an individual characteristic, or a feeling”, says Sah. Instead, she would like to redefine it as “repeated behavioural practices that demonstrate a deep understanding of the concept”, backed by appropriate rules and codes. In that form, anyone can aspire to deep professionalism.

“The law as a profession doesn’t give you some status or standing: you have to earn that,” the senior partner of another law firm told me. “We shy away from [the attitude] ‘It’s OK, we’re professionals’.” In fact, professionals who catch themselves saying or thinking anything similar should be on their guard. They may be in the ethical shallows and about to run aground.