Despite rules requiring every new vehicle sold in the UK to be electric or a form of hybrid by 2030, the luxury brand will still produce cars powered purely by gasoline to cater to international petrolheads, he said.

“There is always going to be an enthusiast who wants a combustion engine,” Mr Stroll told the FT Future of the Car summit. “I don’t see it ever going away to zero.”

While Aston will introduce hybrid and electric cars by the middle of the decade, about 5 per cent of its output will run on petrol alone by 2030, he said.

The brand is bucking the trend across carmakers of phasing out traditional petrol engines to meet tightening requirements.

Volvo’s chief executive Håkan Samuelsson told the FT summit earlier in the week that the Swedish premium brand may be fully electric as early as 2030, while Honda’s European director Ian Howells told the digital conference that every model in its line-up would be hybrid or electric within two years.

Mr Stroll said plug-in hybrid cars would account for about half of Aston’s output by 2024.

He also said the company would never leave the UK despite potential trade challenges after Brexit, declaring that “Aston Martin has to stay in the UK, it’s such a big part of its DNA”.

Bentley chief executive Adrian Hallmark told the conference his business had hired planes to fly in components after Brexit in case of border disruptions.

Mr Stroll, who led a £540m rescue deal of the carmaker earlier in the year, aims to revitalise the company that has seen its value shrink since an initial public offering in 2018.

He said he would aim to restore the brand’s luxury credentials, which will become even more important once most cars are battery-driven. 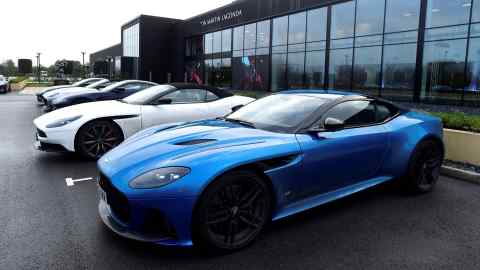 “The differentiator will be the brand — brands will become critical when we get into the electric,” he said.

Two months ago the company unveiled a new partnership with Mercedes-Benz intended to ease Aston’s investment costs in new technology and overcome the company’s lack of size.

The deal, which expands an existing relationship with the German carmaker, will involve the two companies jointly developing custom V8 and other engines for Aston’s use, Mr Stroll said.

Shareholders in the struggling luxury carmaker approved a fresh £125m capital injection at a general meeting on Friday. Shares rose 6 per cent to 79.95p on the news, though they have more than halved over the past year.