Edward White in Wellington and Leslie Hook in London

The United Nations Development Programme is facing several allegations of fraud and corruption linked to the multibillion-dollar Global Environment Facility, according to documents seen by the Financial Times.

A copy of a draft report by UNDP’s office of audit and investigations, dated November 2020, described “financial misstatements” worth millions of dollars across UNDP’s portfolio of GEF-funded projects around the world.

The report highlighted problems including signs of “fraudulent activities” at two country offices and “suspicions of collusion among the various project managers” at another, without naming the countries.

“Issues identified by the audit could seriously compromise the achievement of the objectives of the audited entity,” the report said.

The GEF was set up in 1991 as part of the World Bank to help fight environmental challenges such as deforestation, species conservation and pollution. It has since split out to become an independent organisation and disbursed more than $21bn in 170 countries, including $7bn in projects managed by the UNDP.

The audit of the UNDP’s GEF-funded projects — which covers 2018 and 2019 and is the first review of its kind since 2013 — comes against a backdrop of rising concern from some donor countries over management and oversight issues at the UNDP.

An investigation by Foreign Policy in 2019 published whistleblower accounts alleging the misappropriation of millions of dollars at a UNDP-run GEF project in Russia. Twelve donor countries — including the US, France, Australia and Japan — have since sought an independent review of the UNDP’s handling of that project, according to a letter seen by the FT.

“Matters of misconduct and misappropriation of funds continue to obstruct sustainable development across the world,” the donors said in March in the letter to Achim Steiner, the UNDP administrator since 2017.

The words ‘climate’ and ‘corruption’, people see these as two different worlds, but there is a lot of overlap

In a written response to the FT, the UNDP said it “takes all cases of financial mismanagement and other irregularities extremely seriously”, adding that its GEF projects were some of the organisation’s “most closely monitored”.

“The portfolio, the majority of which is implemented by national and subnational institutions, civil society organizations as well as other UN organizations, is subject to an intricate system of regular reviews, independent assessments and audits,” the UNDP said.

While there have been “allegations of misuse of funds” at certain projects, such complaints affected “a tiny fraction — 1.4 per cent” of the UNDP’s GEF-funded portfolio, it added. The GEF did not respond to a request to comment for this article.

Other project audits from independent consultants as well as written complaints from current and former UNDP staff, all seen by the FT, suggest that concerns over alleged financial misconduct and poor oversight at the UNDP may be widespread.

“What happened in Russia is a Russian problem. But things going wrong are very common,” said Frank Klinckenberg, a European environmental expert who has reviewed GEF programmes across the world for more than 10 years.

An independent review of a GEF-funded UNDP project in Uzbekistan, seen by the FT, warned that financial information provided by the UNDP was not reliable and “must be questioned”. “As a further result, this [midterm review] is required, by UNDP guidelines, to refer this project for a fraud investigation,” the draft report said. 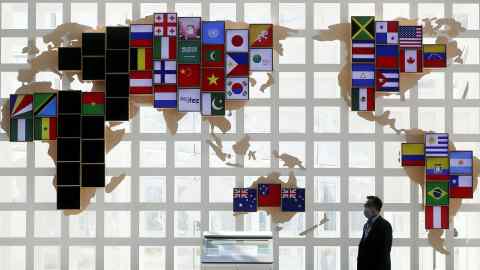 According to another long-term external consultant to the UNDP, problems raised in project reviews frequently seemed to be ignored by senior staff.

“I don’t understand some of the management responses that have been made,” said the consultant, who asked not to be named. “We have an urgent climate crisis.”

The claims of misconduct at the UNDP are not the first allegations of impropriety linked to the UN’s climate work and represent one of the many challenges facing the UN as it seeks to co-ordinate a global response to climate change.

The UN-backed, South Korea-based, Green Climate Fund, the world’s largest climate finance institution, has faced a recent wave of internal misconduct complaints, including allegations of sexism and harassment in the workplace, the FT reported in August.

“The words ‘climate’ and ‘corruption’, people see these as two different worlds, but there is a lot of overlap,” said Brice Böhmer, the head of climate governance integrity at Transparency International, the global anti-corruption group.

Another person familiar with the allegations at the UNDP said there was a history of UNDP internal reviews avoiding “naming names”.

“No one is accountable, no one is responsible. The UNDP lets itself off the hook,” the person said, also asking not to be named. “These funds are intended for the poorest of the poor . . . at what point will donors [to the GEF] decide to suspend funding?”

Transparency International’s Mr Böhmer said governance at the GEF had improved in recent years, but noted that the GEF had limited authority over UNDP projects, which are implemented according to UNDP standards. Mr Böhmer has not seen the audit of the UNDP’s GEF projects reviewed by the FT and could not comment on its details.

“When it comes to climate, we need to have much higher standards,” he said. “If it is a project that is supposed to help an affected population adapt, then this is like penalising them twice.”

The UNDP issued a public statement in response to this article after publication. It can be viewed here.