Cohen moves from Trump’s side into the firing line

A once-loyal fixer could be a problem for the president

Michael Cohen for many years served as the fiercely loyal fixer-in-chief for Donald Trump, to the point that he said in April he would “take a bullet” for the US president.

No longer. The New York lawyer, known as “Fido” because of the pit bull quality he brought to his work, has now become persona non grata in the eyes of Mr Trump.

Speculation has mounted that Mr Cohen, who is under criminal investigation in New York for possible campaign finance law violations, has turned on his former boss and may co-operate with investigators from the Manhattan US Attorney’s office.

Mr Trump started to publicly sour on his former confidant earlier this month after it emerged that Mr Cohen had recorded a conversation the two men had before the presidential election. The discussion involved talk about payment to a former Playboy playmate who claimed to have had an affair with Mr Trump more than a decade ago.

Mr Trump hit out at Mr Cohen on Wednesday for a second time in five days, after Lanny Davis, a lawyer representing Mr Cohen, gave CNN the audio recording.

“What kind of a lawyer would tape a client?” Mr Trump tweeted. “Why was the tape so abruptly terminated (cut) while I was presumably saying positive things?”

Mr Davis told ABC News that Mr Cohen had “turned a corner in his life and he’s now dedicated to telling the truth to everyone”.

Earlier this month when reports emerged that the FBI had seized the recording, Mr Cohen said “my wife, my daughter and my son have my first loyalty and always will”.

Mr Cohen had long been at the side of Mr Trump and during the presidential campaign he was one of the most aggressive defenders of the former New York property mogul on US cable television.

The tape that has now been made public puts the spotlight on another alleged affair. Karen McDougal, the former Playboy model, was paid $150,000 by the National Enquirer, a tabloid, in August 2016 for her story about the alleged affair with Mr Trump, but under an arrangement called “catch and kill”, the newspaper did not publish the story.

American Media Inc (AMI), the company that publishes the National Enquirer whose chairman David Pecker is a friend of Mr Trump, said they decided not to publish the story because they did not find the claims by Ms McDougal to be credible.

While the quality of the recording is poor, the conversation between Mr Cohen and Mr Trump appears to relate to payments to the National Enquirer.

The recording does not name Ms McDougal, but lawyers for Mr Trump and Mr Cohen have indicated that it refers to trying to buy the rights to her story from AMI. Rudy Giuliani, Mr Trump’s personal lawyer, has said no transaction ultimately occurred.

In the recording, Mr Cohen says, “I need to open up a company for the transfer for all of that info regarding our friend David”, in an apparent reference to Mr Pecker. 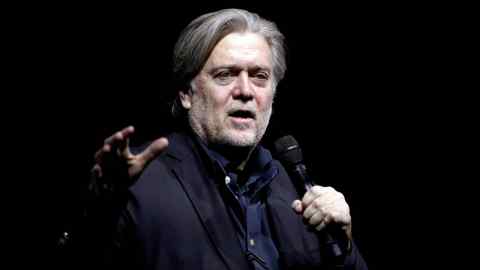 At the end of the recording, Mr Trump can be heard referring to a payment in cash, in an unclear exchange that is a point of disagreement between his and Mr Cohen’s lawyers. Mr Davis told CNN that Mr Trump had suggested paying AMI in cash, while Mr Giuliani insists that the president was saying that he should not pay in cash.

In the recording, Mr Cohen raises the issue of financing, spurring Mr Trump to ask, “What financing?” Mr Cohen says a payment will have to be made.

Mr Trump’s response is unclear, but part of his answer includes the words “pay with cash”. After Mr Cohen says, “No, no, no, no,” Mr Trump says word “cheque” before the recording ends abruptly.

“The only people who use cash are drug dealers and mobsters,” said Mr Davis on CNN. “Believe your own ears.”

Mr Giuliani said the tape should be listened to three times and then “it will become clear”. He also said he had spent over 4,000 hours listening to “mafia people” on tape, in an effort to bolster support for his interpretation of the recording.

“I know how to listen to them, I know how to transcribe them,” he told Fox News. “This tape is crystal clear when you listen to it. I’ve dealt with much worse tapes than this.”

In providing CNN with the recording, Mr Davis was making the clearest statement yet that his client had turned on Mr Trump. Lawyers have said that the recording does not prove any legal wrongdoing. But it suggests Mr Trump knew about Ms McDougal’s claim even though his campaign said he had “no knowledge” just before the election.