Under-insured high-risk countries are banding together to pool risk

Sign up to myFT Daily Digest to be the first to know about European banks news.

One major reason for the difference was the role insurance played in the two island nations’ recoveries. Whereas most of New Zealand’s earthquake-related damages were covered by insurance, very few of Haiti’s were.

The lack of insurance for emerging economies is becoming more of a problem as the costs of natural disasters increase. Exacerbating this risk are the effects of climate change.

Yet there appears to be a growing sense of urgency among policymakers and insurers to address the problem. Last year the G7 nations said they would aim to increase the number of people in the developing world insured against the negative impact of climate change. Since then, December’s Paris agreement to combat climate change was signed by nearly 200 countries. Another initiative is the Insurance Development Forum, a collaboration of insurers, the World Bank and the United Nations. The IDF aims to help emerging economies understand and assess the risks they face, while increasing their access to insurance.

“For years the insurance industry has been very poor at describing the value proposition of insurance,” says Stephen Catlin, executive chairman of the IDF and deputy chairman at XL Catlin, the insurer. But now the UN and other agencies “are starting to understand what we can do for them”, he adds.

One measure of success for the group would be for “more people to be covered against more perils”, says Michael Morrissey, president and chief executive of the International Insurance Society, which supports the IDF.

The IDF’s mission, which it is drawing up, is expected to include helping many of the V20, or vulnerable 20 countries. The members of this group — which officially formed last October at a meeting in Lima, Peru, and which now includes 43 countries — consider themselves among the most susceptible to the effects of climate change.

“The aims [of the IDF and the V20] are fairly well aligned,” says Matthew McKinnon, project manager at the United Nations Development Programme, which is supporting the V20. “Everyone recognises that huge gaps in insurance coverage are a problem. And they’re getting worse each year.”

Finance ministers of the V20 said in a recent statement that the group is aiming to expand access among its members to risk-pooling mechanisms, which allow groups to share the burden of catastrophic risks such as earthquakes and flooding.

Several V20 countries already pool risk with each other, including Haiti, which is a member of a so-called risk pool of 16 Caribbean nations. Haiti received a $7.5m payout from the pool following the 2010 earthquake. Yet insurance payouts overall covered less than 1 per cent of Haiti’s earthquake-related economic losses, which were $8.5bn, according to research by Swiss Re. Meanwhile, damages in New Zealand from its 2010 earthquake and two more in 2011 totalled $31bn, of which insurance covered around 80 per cent.

This gap between economic and insured losses — called the protection gap — is a major determining factor of how well a country recovers from a natural disaster. The gap is much wider among emerging economies where insurance penetration is low.

According to Swiss Re, so-called insurance penetration — a measure of premiums as a proportion of GDP — in Europe was 6.8 per cent in 2014, compared to 3.8 per cent in Africa. In Nigeria this number was just 0.3 per cent.

Natural disasters have become riskier for these countries as their populations and economic development have increased. “When things hit, they’re hitting a higher concentration of value,” says Martyn Parker, chairman of the global partnerships unit at Swiss Re.

Changing weather patterns and rising sea levels due to climate change are only making matters worse.

Swiss Re, whose incoming chief executive Christian Mumenthaler is a member of the IDF steering committee, has been working with governments to address the low insurance penetration among emerging economies for several years. The company helped create the Caribbean risk pooling scheme as well as similar schemes in Africa and among Pacific Island nations. 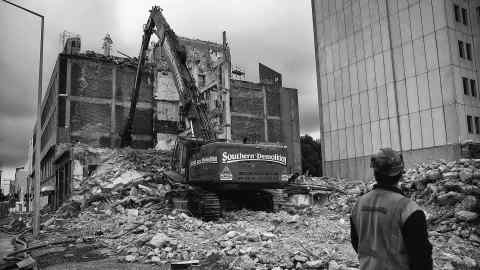 Drawing on this experience, Mr Parker says initiatives such as the IDF could face several hurdles, including a lack of awareness in emerging economies about what the insurance industry can do or even regulatory restrictions against purchasing insurance. But the prospect of opening up new markets will probably be enough to motivate insurers to continue their efforts.

“I’m not going to pretend for one second that the industry’s not looking for growth,” says Mr Catlin, adding that governments and development agencies increasingly acknowledge that the industry can find new business opportunities while at the same time “delivering a societal need more cheaply than a government can”.

Get alerts on European banks when a new story is published