Get the newsletter now
Brazilian economy

Bryan Harris in São Paulo and Andres Schipani in Brasília

The Brazilian government on Tuesday revealed the outlines of its tax reform proposal, opening up debate over legislation deemed necessary to restore the lustre of Latin America’s largest economy.

Paulo Guedes, Brazil’s finance minister, outlined to Congress an initial proposal focused solely on federal-level taxes, in an effort to avoid a confrontation with states and cities. Mr Guedes recommended uniting two social security levies into a 12 per cent goods and services tax.

The finance minister did not raise the possibility of a controversial financial transactions tax, which could trigger backlash in Congress. The government signalled, however, that this was only the “first phase” and more proposals could be expected.

“Today we have taken another significant step in the direction of carrying out the dreamed Brazilian tax reform,” said Daví Alcolumbre, president of the Senate, who, alongside Rodrigo Maia, speaker of the lower house, lauded the government’s submission.

Negotiations on tax reform were expected to begin late last year, but were delayed by political infighting between President Jair Bolsonaro and Congress.

Brazil has one of the world’s most complicated tax systems, characterised by opaque regulations and constantly shifting rules across federal, state and municipal levels. While a typical UK business spends just over 100 work hours to fulfil its tax obligations, a Brazilian company faces 2,000 hours.

Economists, policymakers and businesses have recognised that streamlining the system would create efficiencies for companies and help promote private investment, but efforts until now have always been stymied by powerful vested interests, particularly at the state and city level.

“Even some simplification would already spur tremendous gains. Today, entrepreneurs are afraid of making money because they are afraid of being taxed wrongly or not knowing how to pay the tax,” said Gabriela Rosa Lopes, an economist and tax consultant at BMJ Consultores Associados.

Mr Guedes faces weeks of contentious talks with the two houses of Congress, each of which has already presented its own proposal for tax reform. All three proposals aim to unite Brazil’s plethora of taxes in clear, easily manageable bundles.

The lower house proposal, which appears to have broad support, would create a general tax on goods and services by unifying five different levies across all levels of the state.

According to a poll of politicians released on Monday by broker Necton, 78.6 per cent of respondents said they were confident that tax reform would be approved this year in at least one of the houses of Congress. 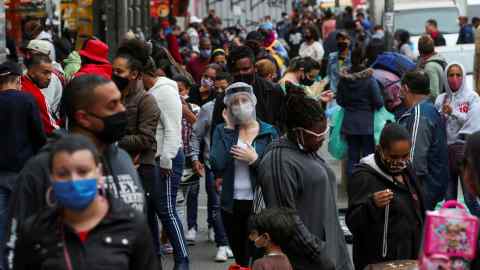 Depending on how the legislation develops over the coming weeks, the tax changes are likely to require multiple votes in Congress.

“Today’s events underscore our expectation that a constitutional tax reform, including federal and state taxes, will probably be approved in 2021, with growing chances of a first lower house vote occurring in 2020,” said Silvio Cascione, Brazil director at the Eurasia Group.

Mr Maia has made clear that the majority of politicians would not support the creation of any new taxes and said he would veto any attempt at “disguised” reintroduction of a financial transactions tax.

The speaker of the lower house is among a handful of influential politicians who are adamant that taxes should not increase after the pandemic, despite expectations that the fiscal deficit will balloon.

“A tax reform that ends up simplifying the system should be seen as positive,” said David Beker, chief economist at Bank of America Merrill Lynch in São Paulo. “But there is still a lot of uncertainty about what is going to be approved and what type of transition period there will be.”

Get alerts on Brazilian economy when a new story is published