Yale, stale and pale? Not any more. Beantown is jumping once again

Boston’s image as the birthplace of modern America – a combination of American Revolution, Civil War, chowder and Kennedys – has often felt as restrictive as the corsets of the Boston Tea Party Museum guides. But a new multimillion-dollar campaign to rebrand the city, and the combination of tech and tradition, means that visitors may be coming in future as much for vodka shots in Jamaica Plain as the shot that was heard around the world.

Like many cities with a vibrant tourism industry, Boston was hit hard by the pandemic. Hotel occupancy went from 82.5 per cent in 2019 to 25 per cent in 2020 and the Massachusetts Restaurant Association has gone on record as saying their losses amounted to $7bn. When the city started to reopen, the mayor at the time, Marty Walsh, decided to reimagine Boston’s branding with a more equitable and inclusive lens to broaden the city’s outreach. While the city itself is increasingly diverse, market research showed it was still regarded as being staid and white. “You could say we were seen as Yale, pale and stale,” says veteran PR Colette Phillips with a grin.

Phillips – a Bostonian by way of Antigua – has been running the All-Inclusive Boston campaign along with the Greater Boston Convention and Visitors’ Bureau, the Proverb Agency and local station NCB10 Boston. “There’s a big similarity between Boston and London,” says Phillips. “In Boston, one in four people is foreign born, and two in four are culturally diverse, whether that’s by ethnicity or by lifestyle (LGBTQ+). People come from all over the world because we are a centre for academia, technology and healthcare. And like me they come thinking they’ll stay two years – now it’s more like 42. Boston has that effect on you.”

The result has been to sell Boston in different ways. First there’s the attempt to reach out beyond the classic tourist haunts of Back Bay and North End to districts such as Dorchester and Jamaica Plain. A heaving event at The Grand Boston nightclub in Seaport in July saw Phillips – dressed all in red right down to her phone – promote businesses such as the Cape Verdean Restaurant Cesaria (named after the singer Cesaria Evora who used to eat there after her shows), Dominican caterers Merengue and Tipping Cow (named best ice cream by Boston Magazine).

Of course, says Phillips, if you want to see Louisa May Alcott’s house in Concord or take an amphibious duck-boat tour around Boston Harbor, those favourites are still very much on offer – as well as the chance to see Dorchester homeboys New Kids on the Block (Donnie Wahlberg still whipping up his shirt to show off his six-pack at the age of 52 when I saw them at TD Gardens earlier this year). But Boston’s strength is that it has also managed to fuse its intellectual and tech firepower to promote itself.

Take fashion. Jay Calderin, founder of Boston Fashion Week, says that the image of Boston fashion as nothing more than boiled wool is out of date. Thanks to the large student population – including Harvard, MIT, Boston College and Tufts – Calderin says style often moves so quickly that even he’s struggling to keep up. “It feels like fashion in Boston is a perpetual experiment.”

Calderin, who has worked for Vogue and Elle, set up BFW in 1995. Last autumn it kicked off with a collaboration with Cambridge Science Week, where the latest in wearable tech and smart clothing were showcased, among them textiles which generate music, and others that regulate the wearer’s breathing.

For Boston visitors wanting slightly more conventional items, he suggests the following. “Try Thom Solo’s shoes – he’s designed for Lady Gaga,” he says. “Or Marie Galvin is a milliner who has designed for Alicia Keys and TLC, or you could try the Afrofuturism of Queen Adeline, whose work is sold at the Peabody Essex museum.”

Those who want their fix of more classic designers can of course walk down Newbury Street, where in a few blocks you can travel from Armani to Valentino. Calderin also recommends Copley Place Mall. “You know, malls don’t usually get on our radar, but they are getting Balenciaga there,” he says. “And Charles Street on Beacon Hill has beautiful boutiques. One I love is December Thieves where they do art-driven wearables and jewellery.”

Fashion isn’t the only place where the latest technology has changed the offering. “Before the pandemic we used to reach our audiences with crowds of 2,000-plus,” says Max Hodge, the executive director of Boston Ballet. Covid meant a total rethink to retain audiences. The result was its ÜNI public art initiative – initially a digital dance offering on its website, but which has now become a pop-up experience for which a specially-made 18ft-by-30ft metal structure covered with PVC mesh is constructed and taken down in hours; only 20 people rather than 2,000 can crowd in at a time. On the dome’s first excursion in August 2022 on Blue Hill Avenue, Roxbury, 500 people queued to watch the half-hour loop over the course of the six-hour event.

For theatregoers, there has been a turnaround too. “I have to tell you I am not a Neil Diamond fan,” confesses Joyce Kulhawik, president of the Boston Theater Critics Association. “The press night was six o’clock on a Sunday evening. It was the last thing I wanted to be doing – but within five minutes I knew it was a brilliant show.”

It feels like fashion in Boston is a perpetual experiment

Kulhawik is talking about A Beautiful Noise, starring Will Swenson, which opened at Boston’s Emerson Colonial Theater last summer and transferred to Broadway earlier this month. The theatre has an eminent history – it opened in 1900 with a production of Ben-Hur that had a cast and crew of 350, a chariot race with eight horses and a young Winston Churchill in the audience. But so did Anything Goes, Porgy and Bess, Oklahoma! and Follies – all started off here before making their Broadway debut.

A Beautiful Noise symbolises a reversal in recent years. “The change is due to several companies,” says Kulhawik, one being “the American Repertory Theater in Cambridge with Diane Paulus at the helm. Another is the Russian theatre troupe Arlekin run by Igor Golyak, who just collaborated on a piece with Mikhail Baryshnikov on a reinterpretation of The Cherry Orchard which has gone to New York.”

“It’s an interesting cultural microclimate,” says Kulhawik. “Boston’s the home of many universities, a lively intellectual community. And there’s an appetite for adventurous theatre here – there’s almost more theatre than people to go to it.”

Those looking for a pre- or post-theatre drink may want to venture back into the established parts like Back Bay though. At six o’clock in the evening in the Contessa restaurant inside the newly revamped Newbury Boston, the bar is four-deep with Negroni drinkers, who, as its creator Mario Carbone puts it, are there “for the aperitivo hour, for the sunset and the rooftop views and maybe not even for dinner.” Just as well: reservations for Contessa open 30 days in advance and are snapped up straight away.

“I see great restaurants as having great drama,” says Carbone. “You set this stage in an effort to tell a particular story, the actors do it every night at the same time, on the same cues, for a different audience, hoping for the same result.”

In New York, Carbone’s restaurant is a celeb haunt – Rihanna, Beyoncé and Ye’s visits are slavishly recorded by social media accounts such as @deuxmoi. No paparazzi currently lurk outside in the more restrained Boston – or at least they weren’t when I was there for a Tuesday reservation – but the views are equally Insta-worthy. The food here is much more northern Italy than Italian American. Think meatballs in mustard and cream sauce ($20) rather than olive oil and tomato, or chicken sostanza ($39) cooked to a Florentine recipe and washed down with the restaurant’s signature drink, the $18 Garibaldi (Campari with blood oranges freshly juiced so that the pectin on top resembles a head of Guinness).

Here in the food scene too, innovation is key. Devra First, restaurant critic for the Boston Globe, says: “The influence of tech is lingering – you see it in the profusion of eating apps,” she says. “And there’s an open-mindedness – there are a lot of women-run businesses as well.” One of her recommendations is Pagu, a Spanish-Japanese fusion between Central Square and MIT run by Tracy Chang, a former teaching fellow on the Harvard Science and Cooking program who previously worked with Martin Berasategui in Spain. Meanwhile the natural-wine-bar sommelier Lauren Friel, who is behind Rebel Rebel in Bow Market, Somerville, has opened Dear Annie, a pescatarian restaurant near Porter Square with the team behind Field & Vine, which sources from local farms.

HTSI
Notting Hill hip? How the west was (re)won 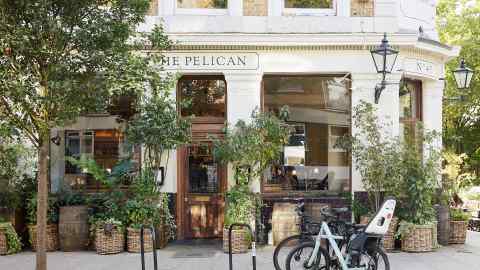 The next iteration of the campaign to sell Boston is due soon. “If you want to go to Fenway or Faneuil Hall, that’s fine,” reflects Phillips. “The idea has been that we highlight the gems that people didn’t know about. We wanted people to know that change is there that they may not have realised.” And, she adds with a chuckle, if there is anything that might show us that Boston has changed, this is it: the FIFA World Cup is coming in 2026.