The Olympic effect will not save Brazil’s workers from recession

Here in Brazil, it is hard to find anyone in the labour market who has not been touched by recession.

I can see the toll it has taken on the professional circle of my Brazilian wife. Anny is an architect, which means her industry is usually the first to enjoy economic growth — and the first to be hit by a slowdown as companies stop building.

Of her closest colleagues, at least half are out of work while the others are scrambling for anything they can get their hands on. Her former boss, for instance, has laid off most of the office workers and is now doing the jobs she used to assign to Anny. Today, she draws most plans for clients herself.

Despite government hyperbole over the economic boost supposedly created by next month’s Rio 2016 Olympic Games, this recession is the worst in more than 100 years. Brazil’s unemployment rate is running in double digits at 11 per cent, from about 6 per cent in 2014.

Ordinary Brazilians are not the only ones who are unemployed. In a sign of the depth of the country’s political and economic crises, President Dilma Rousseff has been left kicking her heels at the Alvorada Palace, the presidential residence. She is suspended pending an impeachment process for allegedly manipulating the government budget.

At least she can look forward to her pension. For many young Brazilians, by contrast, the hard times have come as a shock. For much of the decade leading up to 2014, they had become accustomed to a hot labour market, in which they could change jobs frequently — and each time for a higher salary. So scarce was talent during the boom years that employers were forced to pay over the international odds for people even of moderate ability.

Stories were rife of investment bankers paid more than higher producing counterparts in New York, or engineers who were more costly than those in Europe. Brazil’s labour market became so attractive that Portuguese and Spanish professionals began seeking work in the country to flee the crisis in southern Europe.

The hot market worked with archaic labour laws to ensure Brazilian wages soared while productivity soured. With more than 900 articles, Brazilian labour law is so convoluted it discourages companies from hiring. Employers are required to pay almost double an employee’s base salary in additional payroll taxes and social security payments, and are liable for huge payouts in worker-friendly labour courts if a former employee decides for whatever reason to sue.

But now, employers battered by the boom years are gearing up to use lean times for workers to their advantage.

It may have only been a Freudian slip, as he later claimed, but a statement by the leader of Brazil’s main industry association last week was telling. Robson Andrade, head of the confederation of national industry, or CNI, bemoaned Brazil’s labour laws while making a call for tough reforms in a public appearance alongside interim president Michel Temer.

Why, even France, he said, had recently changed the law to allow employees to work for 80 hours a week in the interests of competitiveness. Considering that this would mean working 16 hours a day in a five-day week, he later realised his error and corrected himself. France was allowing employees to work 60 hours a week (but even then, only apparently with a court order).

But reforms to labour laws, even if they do make the market more flexible and encourage hiring, will be slow to arrive. 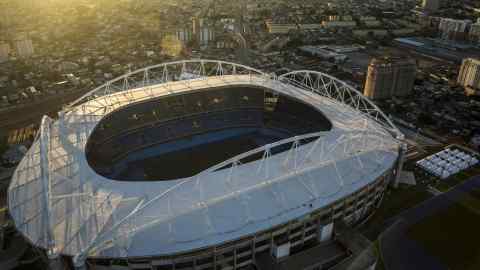 In the meantime, the government is pinning its hopes on the Olympic effect. An EY study exclusive to Valor Econômico, Brazil’s business newspaper, found that the events would create 1.79m permanent and temporary job positions. EY is an official sponsor of the games.

A number that high would be enough to fill a large part of the hole created by the recent rise in unemployment. But of course, most of these jobs will be temporary or one-offs related to construction or services that will disappear when the games are over.

Another way of looking at the Olympic effect is that unemployment may surge once the games are over, as this huge contingent of temporary workers is thrown back into the labour market.

Whatever happens after the Olympics, for Brazilians, there is no escaping it. The days when employees occupied podium position in workplace relations are in the past.

Get alerts on Michel Temer when a new story is published