Andreessen Horowitz has become the first venture capital firm to raise a large fund focused on cryptocurrencies, as start-up investors search for ways to join a boom that has threatened to pass the traditional VC world by.

The Silicon Valley investment firm announced it had raised $300m to back new cryptocurrency-related ideas, including investing directly in the currencies themselves, which have become the focus of massive financial speculation.

Andreessen also named Katie Haun, a former prosecutor at the Department of Justice, to help manage the fund, making her the firm’s first female general partner. Ms Haun led some of the most prominent enforcement actions in the area, including the DoJ’s investigation of Mt Gox, a bitcoin exchange that collapsed after a massive theft.

The large amount of money pouring into the area, particularly in the past 18 months, has made it possible for some tech start-ups to bypass VC funds and raise money by selling their own cryptocurrencies, using a form of crowdfunding called an initial coin offering. Some of these digital tokens have boomed in value, even though the tech projects they are tied to are still in the earliest stages of development.

“You squint one way and it’s a whole new asset class — you squint another way it looks a lot like the venture capital world,” said Chris Dixon, an Andreessen partner.

Transactions in the digital tokens are recorded on blockchains, the decentralised ledgers that underpin cryptocurrencies like bitcoin and Ethereum. Backers claim they will support a new class of disruptive online applications, drawing comparisons with the early, wild days of internet investment.

The potential has drawn particular interest from VCs at a time when large areas of online activity are dominated by a handful of giant internet companies. “The tech incumbents are very centralised . . . it’s inherently misaligned with their existing businesses,” said Mr Dixon. 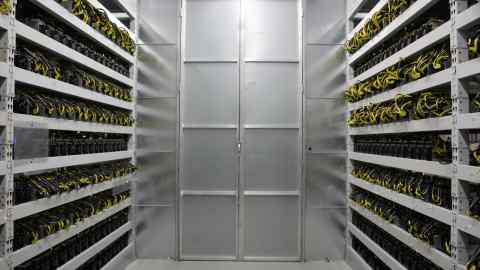 Most venture investors have been left struggling to find a way into the sector. Fred Wilson of Union Square Ventures, one of the first VCs to actively invest in blockchain start-ups, wrote in a blog post last week that “the venture capital fund model is not optimised for investing in the blockchain/crypto sector”, since crypto assets have become “highly liquid and volatile”. That has led Union Square to invest through specialist crypto hedge funds. Venture funds are also barred from making more than 20 per cent of their investments in assets like these.

Andreessen has already made a number of investments in the blockchain world through its existing general-purpose funds. A dedicated fund would give it more flexibility to invest in the field and bring in specialist expertise, Mr Dixon said.

For regulatory purposes, the new Andreessen fund is similar to a hedge fund. Mr Dixon said it won’t actively trade its holdings but plans to take typical long-term VC bets, stretching to 10 or more years.