Get the newsletter now
Investment Banking

British universities have ramped up their spending on new buildings by 43 per cent in the past six months, compared with the previous year, in the race to expand campuses and draw lucrative foreign students.

Contracts have been awarded for £1.5bn of projects, five of which are worth more than £50m each. A further £2bn of contracts is planned between 2017 and 2020, according to Barbour ABI, the construction analysts.

“Since the change in the tuition fee regime universities have focused on improving campus facilities in the increasingly competitive market of attracting prospective students. This has involved using increased student fees and debt markets to invest heavily in construction projects,” said Michael Dall, lead economist at Barbour ABI.

The spending spree predates Britain’s decision to leave the EU, with the effect of which is yet to be seen. Universities have expressed concern that a loss of European funding could result in a drop in foreign students.

Nevertheless, from Swansea to Sheffield and from Southampton to Strathclyde, British universities are carrying out the biggest enlargement programme since the 1960s.

In many cases, award-winning architecture is designed to lure fee-paying students, impress parents and entice academics. There is a new-found confidence among leading universities, who are flush with money from fees and have access to cheap, long-term credit.

University College London in April said it had signed the biggest bank loan in British university history, borrowing £280m from the European Investment Bank to help build a new campus in east London and refurbish its facilities — a £1.25bn project overall. 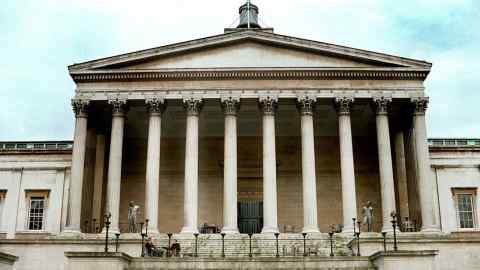 Imperial College is expanding to the west with seven-acre site in White City, where part of the BBC once stood. The London School of Economics’ Saw Swee Hock Student Centre was nominated for the Riba Stirling Prize in 2014, as was the Stockwell Street library at the University of Greenwich in 2015. In 2012, Cambridge University won the prize — UK architecture’s most prestigious award — with its Sainsbury Laboratory.

Universities in the UK are living through “a bit of a golden age,” according to Paul Thompson, rector of the Royal College of Art, which is drawing up plans for its own £108m expansion in Battersea, south of the Thames.

The Higher Education Funding Council for England, which as well as funding, is in charge of monitoring the financial health of the sector, expects capital spending between 2014-15 and 2017-18 will exceed £17bn and will be 60 per cent higher than it was in the preceding four year period.

HEFCE expects the sector as a whole to run an operating surplus every year to reach £1bn by 2017-18 but it also warns that a combination of lower public funding, a fall in fee income and a rise in staff costs could turn that healthy surplus into a £4.5bn deficit — a black hole equivalent to almost 17 per cent of turnover. Universities, HEFCE warns, operate with “fine margins” where small changes can have a “material impact” on financial health.

Put together, HEFCE says the sector’s increasing borrowing and reduced liquidity are “unsustainable in the long term,” particularly for some of the weaker institutions.

Some strains have already begun to emerge, even among the country’s leading universities. In May, UCL’s provost, Michael Arthur said the institution is in a “barely financially sustainable position” and warned of need to increase savings to improve the institution’s cash flow.