Putin finds a fan base in Trump country

From his perch in southern California, Jeff Grimord knows Vladimir Putin is no saint.

A 71-year-old executive recruiter in Newport Beach, Mr Grimord acknowledges the Russian president is often accused of “nasty things”. “Journalists who criticise him are found dead. A little bit of him is still a communist at heart.” Yet despite it all, he cannot help but feel enamoured of the Russian strongman.

“I think he’s the only leader of a large, major country that stands out these days,” Mr Grimord, a supporter of Donald Trump, explained in a recent interview. “He acts like he’s acting in his country’s interest and makes no bones about it.”

Among the many curveballs of the US election, here is one more to add to the list. After years by being pilloried by western leaders, criticised by human rights groups and targeted by sanctions, Vladimir Putin has a small but sizeable fan club in certain corners of the US, particularly among voters who back Donald Trump. Perhaps more improbably, that fan club appears to be growing.

Which White House candidate is leading in the polls?

The shift in perception comes at a time when Russia-US relations remain at a post-Cold War low, with continued disagreements over Ukraine and Syria. Yet several Trump supporters said those stand-offs had only made them more sympathetic to Mr Putin and his world view — particularly to the extent that the Russian president, both personality and policy-wise, appeared to be a direct foil to Mr Obama.

Most said they had had a positive opinion of Mr Putin even before Mr Trump had begun praising the Russian president’s strong leadership, but found the similarities between the two men comforting.

While most western politicians appeared to be constrained by approval ratings — putting their fingers in the air to see where the wind was blowing — Mr Putin and Mr Trump were not afraid of controversial policies, Mr Grimord said, whether it was announcing plans to build a wall on the US-Mexico border or taking action in Syria or Crimea. “[The west] is trying to make [Putin] out to be a real aggressive S.O.B. but I think he is doing what he perceives to be in the best interest of Russia,” he said.

Frank Hawkins, a small-business owner in the Florida Keys, said he admired Mr Putin’s actions in Syria and the way he had been able to crack down on Muslim extremism in Russia’s restive majority-Muslim republics — something he hoped Mr Trump himself would echo in the US. In Santa Barbara, David McCalmont, a 71-year-old Trump supporter, praised Mr Putin for working the Ukraine conflict to his advantage and asserting Russia’s right over “its sphere of influence” in the former Soviet Union.

While some Republican Party neoconservatives might worry Russia wants to drop a bomb on New York City, he — like Mr Trump — believed that the US government should take a more isolationist approach to certain foreign conflicts and focus on its own national interests — something Mr Putin had done with great success.

“Right now there are a lot of people who are very frustrated and very angry that have been cast aside. They’re looking for someone to come around and be forceful . . . and have someone at the helm — not like Hitler or Mussolini — but someone who is strong,” Mr McCalmont said.

Throughout Mr Trump’s campaign, the Republican nominee has made a softening stance towards Russia a core point of his policy platform, repeatedly claiming that he would get along with Mr Putin and be able to negotiate deals with him.

It is a departure from the Republican Party’s historical stance on Russia. In 2012, Mitt Romney declared Russia to be the United States’ “number one geopolitical foe”, while traditionally the party has cultivated the image of being tougher than the Democrats on Russia, a reputation that dates back to Ronald Reagan and the Cold War.

In Washington, both establishment Republicans and Russia experts have expressed alarm over Mr Trump’s comments. “Of all the damage Trump can do to the American conservative movement, making it pro-Putin rather than pro-freedom could be the most serious,” Bill Kristol, the editor of the conservative Weekly Standard, tweeted.

Edward Luce
How Putin is messing with American heads 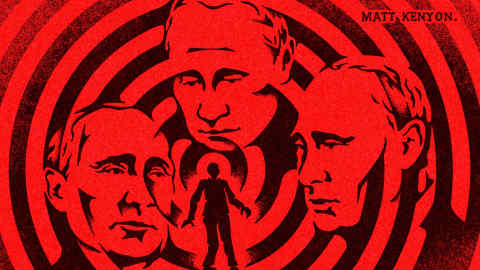 Andrew Weiss, an analyst at the Carnegie Endowment for International Peace, said he worried Mr Trump’s comments about the US being a declining power that could be manipulated would encourage Russia to take a bolder stance against the US in the future. “We’re in a really long-term dangerous place with the Russians and the false comfort that Trump is providing them.”

Yet while Mr Trump’s comments have alarmed the Republican mainstream, they have galvanised many of his followers — particularly white nationalists who have long voiced respect for Mr Putin’s aggressive form of nationalism and the type of respect he commands.

Richard Spencer, a self-avowed white nationalist in Montana, said the support for Mr Putin among Trump supporters suggested Republicans might be finally coming around to Mr Putin, both for his nationalist policies and the macho image he represented.

“I usually find conservatives are trapped in the Cold War,” he said of the polling data. “But maybe they’re not.”