May 17, 2019
Print this page
Experimental feature

On a balmy Monday morning in London, Castro Smith is hunched over a copper bowl while a nearby pot of green liquid simmers like a cauldron, ready to be applied over its surface. With one hand, he cradles the bowl like a disobedient animal trying to escape his grasp, with the other he’s furiously rubbing with a sponge, eager to buff the patina to the perfect muted shade that disguises the web of lines that have already been carved into the surface. Next, Smith will re-engrave the bowl, each cut revealing the shine of copper from beneath the coating. It’s all a bit “toil and trouble”, I observe. “It’s a lot of chemistry — acid and alkaline,” he says. “I’ve been trying to get the perfect colour — you have to act really fast, because copper is so reactive. The surface will continue to change, copper always does. It’s chaotic.”

Smith, 30, is better known for intricate detail than big science. His popular rings feature complex engraving — carefully rendered ships, sea creatures, dragons and skulls — the details of which are enhanced by different shades of plating; rose gold, blue rhodium, white gold. In the three years he’s been making jewellery under his own name, Smith has built up a healthy bank of clients, and an active audience of 25,000 on Instagram, who enjoy marvelling at the intricacy of an undulating octopus carved on the surface of a ring, or the detail on a hare leaping around a wedding band. He’s keen to have all features carved in, rather than protruding out, so his pieces will last; “If you look at Greek or Roman pieces in a museum, or even Egyptian writing, the seraphs are engraved in deep and strong — it’s build to last, it won’t chip away.”

Newcastle-born Smith’s studio has been based in Sarabande for 18 months. The East London charity founded by the late designer Alexander McQueen offers workspaces to young creatives. “Castro’s not taking any more commissions until June — he’s got that much work,” says Trino Verkade proudly. She’s the mother hen of Sarabande — a former confidant of McQueen who can now be found patrolling the studios and dispensing advice to young makers and designers.

Smith’s client base is diverse. “A lot of people who don’t usually wear jewellery come to me — they just want one special bespoke thing with their name or symbolic details,” he says. He gets a lot of scientists coming in, attracted to his insects, flora and fauna. Recently, he had a visit from an esteemed marine biologist who has a podcast about sharks. “He free swims with great whites. We spoke for about two hours about sharks,” says Smith, gesturing to sketches of various Hammerhead-embellished pieces. “I’m making him a few things — I think he sees himself as a bit of a King Neptune character.” For another client, he’s making a tribute to a ring her father used to wear, while another wants a ring to symbolises her passion for martial arts. Some people choose their symbols straight away, others spend months deliberating and require endless sketches. “Everyone’s got their stories, you know,” says Smith. He sees his job as teasing them out, sort of like a therapist, until he lands on what details feels right. “Maybe it’s like a palm reader. You have to ask so many questions. What’s important to you? Where’s your wife from? How did you guys meet?”

As a child, he drew obsessively, both by hand and on the computer — “I was into Photoshop, things like that.” For a while, he wondered about a career in computer games. The aesthetic he’s known for today, all fantastic beasts and odd body parts, dates back to then. “It’s always been very much led by my imagination. It’s fantasy. Perhaps the style is less messy, but the themes are the same.” He lived in Sweden for a while, painting backdrops in a theatre, then decamped to Germany, where he didn’t do much apart from fill countless sketchbooks. Then, back in London, he managed a cocktail bar in Shoreditch; “The hours were 8am to 8pm — it was horrible.” He was applying for gaming jobs, but kept being told that his computing skills weren’t strong enough, so he landed on an engraving apprenticeship with the Goldsmiths’ Company.

He detested the work at first. “It was incredibly hard — and most of it was just polishing. Not small things, but huge sheets of silver. You’re covered in oil and you’re using so much paraffin — my asthma got really bad. No one wants to do polishing, so you’re really the bottom people. A lot of the people there were 16 or 17 — a very traditional apprenticeship.” Tips and training were hard to come by. “You’re just cleaning the workshop, getting on with things, but every time I had a chance, I’d lean over someone’s shoulder and try and have a glance at how to do something.” At night, he’d practice his own pieces at home. He produces an early piece, a vintage copper hot water bottle engraved with hundreds of fine branches, flowers and insects. The level of detail is mind-numbing. How long did it take him? “I honestly can’t remember. I’d had far too much Red Bull.”

Eventually his engraving started winning competitions, and he began uploading his drawings and designs to Instagram, where he was spotted by the team at London’s fashion mecca Dover Street Market and recruited to sell a range of rings. “I didn’t actually know what Dover Street Market was, it sounded like a street market, which was ironic in a way, as I always thought I’d end up with a market stall. I thought I’d go to Spitalfields and have a stool and my tools and I’d engrave people’s names in the street. I still have the little kit I bought to do that.”

At Dover Street Market, Smith’s rings sit alongside fine jewels by luxury brands such as Delfina Delettrez and Repossi. His style is somewhat incongruous with their clean lines and the trend for graphic, modern pieces; “Put a little line and stick a pearl on the end, everyone will love it,” he laughs.

Smith credits much influence to Japan, where he travelled after launching his jewellery business. He sought to learn from Japan’s “Living National Treasures”, a colloquial term for the master craftsmen who are certified as Preservers of Important Intangible Cultural Properties by the Minister of Education, Culture, Sports, Science and Technology. Access was tricky. “I was sending letters to all the different metal works, attaching pieces of my work, and no one was replying. It’s really so closed off,” he says. Eventually Mamoru Nakagawa answered and Smith was permitted to visit. “Once people knew I was associated with him, they were more open. And I met lots and lots of people.” He spent the bulk of his time in the studio of Kenji Io, where he watched a worker hand-raise a copper teapot, including the spout and the handle, from one sheet of metal, simply by striking it over and over again.

The bowl, Smith’s largest piece to date is, in part, a tribute to that time in Japan. The original form was created there — raised up by hand from a single sheet of copper. The choice of metal pays tribute to Japanese tastes, and the value placed on copper rather than silver or gold, unlike in Europe. “In Japan, they are much more interested in the many different colours that a plain metal, like copper, can go. Copper is so revered there that people will spend thousands of pounds on a copper teapot,” Smith explains.

The bowl has been commissioned as part of a collaboration between Ketel One, a 327-year-old vodka business, and Sarabande, to time with London Craft Week. For the second time, two artists from the Sarabande studios (this year, it was Smith and the Turkish artist Esna Su) were commissioned to produce special works. Smith drew inspiration from the brewing process of the Vodka, hence his bubbling chemicals. The surface is decorated with engraved waves, which reference the distillery’s location in Schiedam in the Netherlands. “I used to go over to Amsterdam from Newcastle by ferry when I was young. My granddad and all of his sons were fishermen, so I spent a lot of time on the beach. And craft is always picked up by trade — so carried over the seas by boats. It’s scary, the sea, isn’t it? — the waves crashing, the rocks.”

There’s not much opportunity to dwell on symbolism now. Smith’s craft takes time. The bowl has already been struck 500,000 times, just to get it into a shape, and he estimates it will take him about half that number of times again to complete the engraving. After drying the bowl, he begins to strike, armed with a small Japanese tool. With each hit, the copper glimmers and the froth of a wave appears. 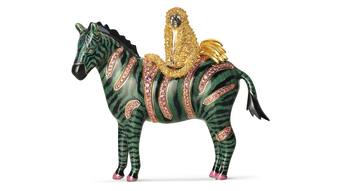