What would it take for you to switch your bank account?

After weeks of customer chaos, only a tiny percentage punished TSB by leaving
Claer Barrett

They say that people in the UK are more likely to get divorced than split with their bank. What kind of “unreasonable behaviour” would it take for you to ditch your current account provider?

I would argue that a major IT meltdown which locked customers out of their online accounts for weeks on end, and left many vulnerable to fraudsters while others were incorrectly declared dead (yes, really!) were all up there.

These are all problems experienced by customers of TSB, dubbed the “Totally Shambolic Bank” after its disastrous IT upgrade earlier this year. At the time, Twitter was awash with aggrieved customers — many using the hashtag #tsbfail — who described their terrible experiences in gory detail. I mentioned many of these in a previous column, suggesting that TSB stood for “Time to Switch Bank”.

On Friday, at the bank’s half-year results, it provided an update on the number of customers who had voted with their feet and switched their current accounts to another bank. Go on, see if you can guess how many actually moved?

Well, the net loss for the second quarter of this year was a puny sounding 6,000 customers. TSB reported that while about 26,000 customers switched their account away from TSB in this period, more than 20,000 customers opened a new bank account or switched to TSB.

Overall, the bank said that the number of customers moving away wasn’t much higher than the first quarter of this year, before its online banking platform fell over.

A small number, considering this is set to be one of the most expensive IT problems in British banking history. TSB has set aside an extra £176m to deal with the aftermath, the majority of which will be spent on customer compensation and redress.

Perhaps more will become ex-customers after they obtain this compensation. Others may have been swayed by the £30m the bank spent waiving overdraft fees and charges to apologise for the problems. The lender has also tweaked up interest rates as a panacea.

Regulators have fined banks with IT problems in the past, but the low switching numbers suggest they can behave as badly as they like and customers will do precisely nothing. 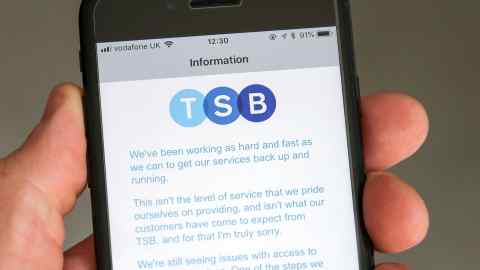 What could possibly explain such levels of inertia? Considering the scale of the response, TSB customers might be thinking that lightning is unlikely to strike in the same place twice. An opinion I’ve heard many friends express about banks is that “they’re all the same”. Certainly, there have been memorable IT problems at other banks including Tesco, RBS, plus the Visa and Mastercard payment systems.

Overall, the number of people who switched bank account rose 6 per cent in the year to June 30, according to data this week from the UK’s Current Account Switch Service. Nearly 1m customers switched providers in this period — some banks offer a cash bonus of more than £100 to those who do so.

My husband is one of them. He had been with his bank for more than 30 years, but I convinced him to move to Nationwide to take advantage of its switching bonus, plus the 5 per cent interest rate on its current account. This is valid for one year on the first £2,500 of his balance — better than any easy access savings account.

His reluctance to switch stemmed from worries that his salary would go missing, or direct debits would be mangled, but the switching service deals with all of this hassle for you. Nearly 99 per cent of switches are completed within seven working days. So it really couldn’t be easier.

When it comes to savings accounts, the Financial Conduct Authority has also been pondering how to combat high levels of inertia. Although 87 per cent of Britons have savings stashed in easy-access accounts and cash Isas, interest rates for loyal customers are usually pitiful. To get the best rates on the market, customers have to be proactive and switch.

This week, the FCA came up with the frankly bonkers idea of forcing banks to pay a minimum level of interest to all customers.

Known as the “basic savings rate”, the problem is, as interest rates continue to bump along the bottom, the difference between the best and the worst easy-access savings rates are not that great. Unless you have an absolute mountain of cash, the annual benefit of switching in pounds and pence is likely to be unexciting. You would probably be better off if you spent the time switching your mortgage, or even your electricity provider.

As one FT commentator rightly pointed out, the FCA should be less bothered about minimum rates on savings accounts and more concerned about the maximum rates on loans.

All credit to the regulator for shining a great deal of light into the murky world of high-cost credit, but there is still much more it could do. A separate report on household debt levels this week from the Office for National Statistics contained some alarming numbers.

The press release could have been written by Mr Micawber himself. Last year, the average British household spent about £900 more than it received in income — a collective overspend of over £25bn, much of it financed with borrowed money. This is the first time in 30 years there has been a deficit.

The poorer you are, the worse your debt levels are likely to be — and the higher the ultimate cost of borrowing. The ONS report showed that the least well-off 10 per cent of households spent two and a half times their disposable income in 2017, whereas the most affluent 10 per cent spent less than half of theirs.

To paraphrase the Dickens’ character, for so many to have a net result of “misery” is building up big problems for both lenders and society at large in the future. Something had better turn up.