UK mortgage approvals have beaten expectations and risen to the highest level since August 2007 while growth in manufacturing activity has also increased, signalling areas of economic strength while businesses face further Covid-19 restrictions and post-Brexit uncertainty.

The number of UK mortgage approvals in November increased to 105,000 from 98,300 in October, the highest number since August 2007, data from the Bank of England showed on Monday.

The figures defied expectations of economists polled by Reuters, who had forecast a decline to 82.500. They had expected approvals to weaken because of the lockdown in England and rising interest rates.

Hina Bhudia, partner at Knight Frank Finance, the estate agent’s financing arm, said mortgage activity “has been unlike anything we’ve seen” since before the financial crisis as “borrowers that opted to reassess their housing needs during the spring lockdown worked their way through the buying process”.

This is despite “effective” interest rates — the actual interest rates paid — on newly drawn mortgages rising 5 basis points to 1.83 per cent in November, close to the rate at the start of the year and higher than the trough of 1.72 per cent in August.

The BoE also revealed that in November, when most households were facing tough coronavirus restrictions, consumer credit weakened with net repayments of £1.5bn, compared with strong expansion in the pre-pandemic period.

At the same time, households started building bank deposits again as they could not spend on travel or entertainment.

Household deposits increased by £17.6bn in November, up from £12.7bn in October. The increase in November was similar to the average between March and June, of £17.5bn a month, and much higher than the £3.6bn of the 2017-2019 monthly average. 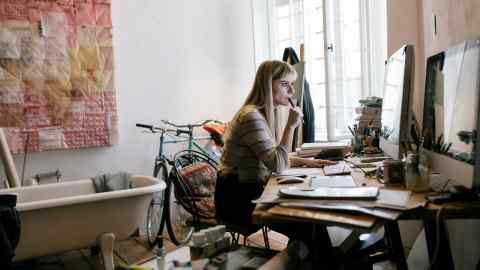 Ruth Gregory, senior UK Economist, at consultancy Capital Economics said: “With households investing in property and strengthening their balance sheets, there is plenty of scope for household spending to rebound strongly once the Covid-19 restrictions are eventually lifted.”

However, soaring infection rates across the UK as the new Covid-19 variant takes hold in an increasing number of regions, point to restrictions remaining tight for the first months of 2021.

The data was released as a closely followed survey showed UK manufacturing activity rising to a 37-month high in December, boosted by businesses anticipating purchases in advance of the end of the Brexit transition period.

The final IHS Markit UK purchasing managers’ index for manufacturing, a measure of the performance of the sector, rose to 57.5 in December from 53.8 in the previous month and marginally higher than the initial 57.3 estimate published in mid-December.

Rob Dobson, director at IHS Markit, which compiles the survey, said: “The manufacturing PMI rose to its highest level in over three years in December, mainly reflecting a boost from last-minute preparations before the end of the Brexit transition period”.

Manufacturers also reported widespread supply-chain disruption linked to the end of the Brexit transition period on December 31, with businesses describing a lengthening of supplier delivery times. Raw material shortages, port delays, freight capacity issues and Brexit concerns all contributed to the delays, according to the report.

Duncan Brock, group director at the Chartered Institute of Procurement & Supply said: “This rush to secure supplies meant already stressed supply chains paid the price with some of the longest delays in the near 30-year survey history.”