Our columnist joins JPMorgan staff for a tech-free race

JPMorgan Germany boss Dorothee Blessing does not believe in timing her runs. This fact should have me running for the hills — pun intended — ahead of my first Fit Hacks outing with a banker.

I am the sort of person who delays walking downstairs with a load of laundry until my Fitbit is charged and ready to record. I like to run with kindred, measurement-obsessed spirits, not devil-may-care, laid-back folk like Ms Blessing.

This former Goldman Sachs partner is unnervingly nice for a woman described as “banking’s iron lady” by Handelsblatt, the German newspaper. She offers me water and encouragement in equal measure at the startline of the Frankfurt leg of the JPMorgan Corporate Challenge.

She is also much, much faster than me. About 100m or so into the 5.6K run, she leaves me in a trail of dust, her blonde ponytail swallowed up at the very front of the 60,000-plus posse dashing through the city centre.

After the race, she claims to have no idea of her time or whether she was faster than last year. Hers does not appear among the official race results. “It [the time] is actually not important,” she says. “I love to run.”

On Corporate Challenge night, Ms Blessing says, “It’s about the feeling, running through the city with so many people” and the €250,000 raised for a charity that supports sport for young people with disabilities.

On weekend runs in the forest, she says: “I find that I can get my head free, get fresh air . . . And I also think that once in a while challenging yourself physically is good.”

Bankers are an ambitious bunch, especially those of Ms Blessing’s rank. I have seen many start out with 5km and progress to ludicrous ultra-marathons in their quest for constant improvement (and bragging rights).

Not Blessing. “For me running is just for fun and to relax,” she says.

I could say the same, but it would be a lie. Following the race, sitting in Frankfurt’s opera house where the bank’s hospitality was, I attempted to work out how much training I would have to do to come back next year and beat her. I did the run in around 29 minutes. Given how much faster she took off, I am guessing the clock showed well under 25 when she came in.

The eagle-eyed among you may have noticed the vagueness of my “around 29 minutes”. In the spirit of learning from Ms Blessing, I decided to run technology-free with no Garmin smartwatch to monitor my heart rate, pace and distance and no iPhone to provide a soundtrack.

It is very odd to look down at your wrist for reassurance and find there is nothing there. Odder still to do it five times in the space of a few minutes and be equally surprised each time.

Without technology to tell me I was on track, I had to outrun the constant fear of going too slowly. Even though I had lost Ms Blessing early on, and had no hope of catching her, I still had something to play for and a reason to want to finish strong.

I had been struggling with fitness for months, but I thought a race would snap me out of it. Instead, despite setting out at a sedate pace, I could not get through 5.6km without stopping repeatedly.

FT SeriesFit Hacks: join our challenge
Fit Hacks: Audiobooks to get you up and running 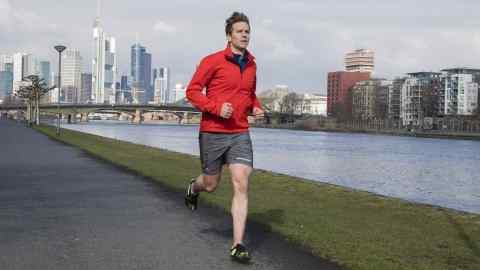 My legs burnt. My breath came in gasps. My heart raced. I was overtaken by people of all shapes and sizes. By the time I crossed the line, at 40 minutes, I was convinced that I just could not run any more, and that even 5K fun runs were out of reach.

I laughed it off with colleagues afterwards and vowed to train harder, but I felt like I lost something on those Frankfurt streets.

It would take me another few months to work out that going from being marathon fit to barely being able to climb a few flights of stairs is a symptom of more than just laziness. I was severely anaemic.

Once I began to right that, joyful running soon followed, but I still felt like I had something to prove in Frankfurt that night last week.

I have not totally made peace with not knowing my precise time, but on some level I believe that if I had tracked myself the whole way around I would have been slower. Not knowing how well or how badly I was doing was a powerful motivator to do better.

I am still probably going to buy a next generation Apple Watch, and I am seriously tempted by a digital skipping rope, profiled in How to Spend It a few weeks ago.

However much I redeemed myself, Patrick still finished the Corporate Challenge a good four minutes ahead of me, even though he started in a crush of thousands and I started at the front. I will take all the help — technological or otherwise — I can get.

Our first Runbet challenge ended on Sunday. Since then I have completed a grand total of zero runs, further confirming that without accountability and the prospect of public shaming, I am by nature a lazy person.

One hundred and thirty-nine readers pledged $40 and committed to run four times a week — or risk losing your cash. The 99 winners took back their money back, plus a cool $7.74 to spend on whatever your heart desires. If you missed out, or signed up but donated your cash to us, fear not: we plan to launch another challenge in early July.

In the meantime, I need to find a way to get my cross-training up to speed. Any runner knows that having a race deadline is a great motivator, but what’s the equivalent for skip rope and push-ups?

Some years ago, signing up for a White Collar boxing fight proved to be a huge training catalyst. The prospect of being knocked out in front of 700 people was enough reason stay on schedule. I might have to do this again. So, if you know anyone in the Frankfurt area that wants to punch me in the face, please be in touch.

Explore the series
READ MOREFit Hacks: join our challenge
Fit Hacks: how to run like a banker 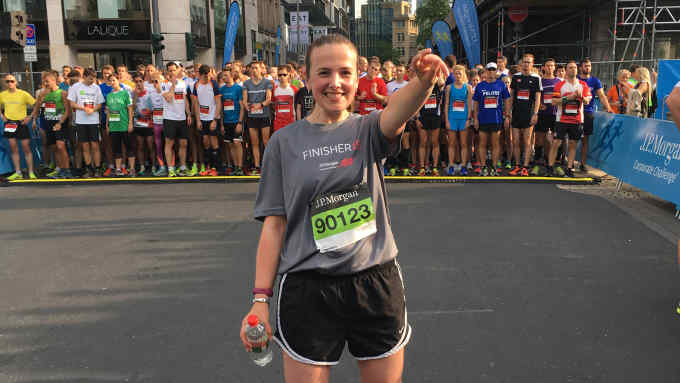