Central and eastern Europe start-ups look beyond EU for finance

Many ventures are dependent more on Brussels than private investors

From the Estonian software behind Skype through to the Croatian electric supercar manufacturer Rimac Automobili, central and eastern Europe has produced dozens of globally successful start-ups in the past three decades.

Leveraging a pool of tech-savvy graduates as well as low costs and geographical location, the region’s start-ups have also benefited from generous Brussels financing as the EU has spread eastward.

However, developing the scarce supply of private investment in start-ups is a rising priority.

A traditional emphasis on technical subjects in the education system has made the region particularly fertile ground for start-ups in the field of information and communications technology (ICT).

Skype, which provides online chat and video call services, is the most famous example. It was developed by Estonian engineers, backed by Scandinavian entrepreneurs and launched in 2003.

The breakthrough has proved a boon for Estonia, nicknamed the “Silicon Valley of the Baltic states” and home to one of the region’s leading start-up ecosystems.

“Skype was the first real success story from the region,” says Gergely Boszormenyi, director at Budapest’s Design Terminal, a centre for creative industries. “Estonia has now around 10,000 start-ups, incubators that are operating well, and an exemplary policy environment.”

The Czech Republic has also developed a reputation as one of the region’s ICT leaders, with capital more freely available than in some neighbouring countries. Local champions that have achieved global reach include security software developers Avast and AVG, with relative newcomer TeskaLabs — focusing on mobile and internet security — aiming to join them, says Cedric Maloux, chief executive of StartupYard, a Prague-based backer of early-stage businesses.

But many start-ups in the region are highly dependent on various EU funds to develop, whether in partnership with private investors or not.

The amounts available across Europe are substantial: In the period from 2014 to 2020, the European Structural and Investment (ESI) Funds are expected to invest €121bn in research and innovation, ICT and support to small and medium sized business across the EU.

Recent commitment of funds include a €160m deal between the European Investment Fund (EIF) and Raiffeisen-Leasing Poland to provide financing for SMEs and start-ups, and two similar agreements worth a total of €135m with Raiffeisen in Bulgaria.

EU funds, then, are an essential component of the start-up environment in central and eastern Europe, supplemented in some cases by government financing.

Daniel Tomov, founder of Eleven, an accelerator venture fund in Sofia, says that the involvement of EU agencies has shared welcome experience, helping to reduce the risks involved in early-stage investment and encouraging private investors to join subsequent rounds of fundraising. 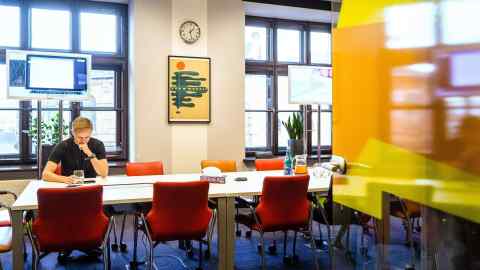 Others, though, question the effectiveness of Brussels funding for requiring large amounts of paperwork, and for lacking pressure on recipients to deliver commercial returns.

Furthermore, there are fears of a vacuum once current programmes start to wind up towards the end of the decade.

“When starting, entrepreneurs are continuously wasting resources to fit criteria written and set by bureaucracy, and are missing the time and opportunity to validate their products with real markets and actual customers,” says Mr Boszormenyi. “There’s a grant addiction — a one-sided dependence on EU funds.”

Michal Kordaczuk at law firm Dentons, who works with Polish start-ups, says the vast majority of venture capital in the country is backed by the EU or the government’s Krajowy Fundusz Kapitalowy, a fund of funds.

“It turns out that start-ups that are taking public or EU money do not have to succeed and they are not that motivated to succeed,” he says. “Everything would change if we had more VC funds with private money where the need of having the highest return of investment is a primarily goal of the VC fund.”

Either we become Europe’s most competitive market, fiscally, administratively, transactionally, or we will remain stuck in the shadow of Berlin, Stockholm or Tel-Aviv

But a number of factors continue to hamper the development of alternative sources of funding for start-ups.

Angel investing is generally in its infancy in most countries in the region. There are exceptions — Mr Boszormenyi cites the “Estonian miracle” based on “a dense network of business angels” and Mr Maloux says the Czech Republic is well-developed in this regard. Nonetheless, a relatively small number of wealthy individuals somewhat limits the pool of angels. Similarly, relatively low levels of disposable income make crowdfunding difficult.

Risk aversion, as elsewhere in Europe, is another problem, though some feel that this is breaking down as a range of start-ups in the region flourish. Maciej Sadowski, chief executive of Startup Hub Poland, hopes that by 2020 there will be enough leaders with records in the region to attract more private financing.

“The next five years are definitive here,” he says. “Either we become Europe’s most competitive market, fiscally, administratively, transactionally, or we will remain stuck in the shadow of Berlin, Stockholm or Tel-Aviv.”