Way to roe: the irresistible call of caviar

It’s easy to get carried away talking about caviar. No other food casts such an intense spell – starting with its appearance. Depending on the species of sturgeon (beluga, sevruga and ossetra are the most familiar), those dark glistening orbs vary in shade from tarmac black to shimmering bronze to vibrant green. Then there’s the taste, which ranges (according to species but also factors such as the age of the fish) from briny to creamy, with some being reminiscent of everything from dried fruit to toasted grains.

There’s also the history, which is long and rich. The Persians savoured caviar for its medicinal properties. The Native Americans weaned their babies on the stuff. The Russian Tsars chased it down with vodka. Every generation has its tales. I remember one account by actress Diana Quick of her time at Oxford in the ’60s. Lucky to become part of a private dining club bankrolled by a pal, she ate foie gras and oysters, drank Château Latour and was inspired to make caviar sauce, a hollandaise enriched with cream and caviar, to go with fish. That’s what I call an education.

This winter, sales of caviar rocketed as customers splurged on safe treats (“revenge buying to make up for a bad year” is how one supplier put it). Many still enjoy it the traditional way (with a spoon or on blinis) but roe can also be spooned onto scrambled eggs, served with crème fraîche on baked potatoes (à la Caviar Kaspia, in Paris) or used to top pasta.

To me, serving a large tin of caviar with blinis and a mother-of-pearl spoon is pointless”

The global trade of wild caviar was banned in 2006 due to dangerously low stocks and now all caviar is farmed: China, Italy and France are among today’s biggest producers. When it comes to retailers, Petrossian – a brand with recognisable credentials and Michelin-level endorsements – is now, a century old, one of the most august. Founded in Paris in 1920 by two Armenian brothers, Melkoum and Mouchegh Petrossian, the company currently operates restaurants and boutiques in Dubai, New York, Las Vegas and Los Angeles and recently launched its UK online store.

Alongside brands such as N25 Caviar and Exmoor Caviar, Petrossian has also been forging links with chefs to use caviar in fine dining as more than just a garnish.

Charlie Tayler, head chef at Simon Rogan’s Aulis in London, marks the shift. “When I first started cooking caviar it seemed to be more of a status symbol, served to ‘be seen’, rather than for actual enjoyment, and often without a proper understanding of the ingredient. These days, it’s far more accepted in kitchens as a component to help aid seasoning and balance within dishes. I’ll almost always pair caviar with fish dishes to help enhance the natural salty, umami flavour as opposed to serving a large tin with blinis and a mother-of-pearl spoon, which for me is pointless.”

Fish remains the most common pairing. At The Inn at Little Washington in Virginia, for instance, the peekytoe crab and cucumber rillette comes finished with Petrossian’s briny, nutty Tsar Imperial Ossetra. But at Grégory Marchand’s Frenchie in Paris, a dollop of the creamy, sweet Daurenki caviar finds its way onto fried chicken. At Ikoyi in St James, the egg-yolk butteriness of Schrenckii caviar (from N25) works wonders with aged Jersey beef and fermented plantain waffle (one of many surf-and-turf combinations showing up on menus). And at A Wong in Pimlico, the saltiness of ossetra caviar (from King’s Fine Foods) counteracts the sweet plum sauce in the Peking duck pancakes. As for dessert, how about the sweet-saline punch of Barcelo imperial rum ice cream with banana mole and ossetra (from Rossini Caviar) at Amelia in San Sebastian or the equivalent dish with Zacapa rum at Da Terra in London? 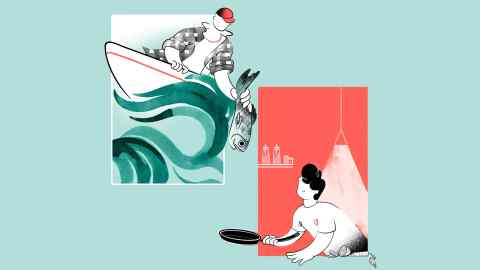 Perhaps most gratifying is the use at Muse by Tom Aikens of an Ossetra/Siberian hybrid caviar with nutty, buttery flavours (called “Platinum”, from King’s Fine Foods) in a dish called “From a Humble Beginning”. This comprises an onion custard inside the shell of a baked Roscoff onion, set with an onion tea jelly topped with caviar and sour cream, and surrounded by onion soup and roast onion oil. “The caviar helps to celebrate and elevate something so simple,” says Aikens. And that’s the point, isn’t it? In texture, taste and sheer exuberance, caviar lifts everything – from the humble onion to our collective mood.