The legal side, rather than technology, proves the problem for central bank pilot

Stock exchange operators from Shanghai to New York are looking at distributed ledger technology (DLT) in hopes that it can make their computer systems more efficient, reliable, and secure.

A pilot project in Canada suggests that these potential benefits will take time to realise, however, and that working around regulations will be a bigger hurdle than perfecting the technology itself.

Worldwide, three quarters of the financial market infrastructure operators surveyed by Nasdaq and Celent are working on distributed ledger technology pilots or already using DLT. The Australian Securities Exchange is the first major bourse to commit to replacing part of its settlement infrastructure with DLT, although it recently delayed the switch by six months to spring 2021.

An eight-week DLT pilot by Canada’s central bank suggests that practical applications for the technology may take even longer to arrive.

“We see that there is promise in distributed ledger,” said Scott Hendry, director of financial technology at the Bank of Canada, in March when he announced the completion of the pilot, named Project Jasper Phase 3.

“But when you are looking at core systems that are systemically important and have been optimised over 20 years or more, the bar is very high for this alternative technology to offer significant benefit,” he added.

In the first two phases of Project Jasper, the bank worked with the national payments network operator, Payments Canada, to build a distributed ledger technology system for cash transfers between banks. TMX Group — which operates the Toronto Stock Exchange — joined for Phase 3, which involved building a proof of concept system that could instantly execute the swap of cash and equities for agreed-upon trades.

Such a system could ultimately form part of a more complete DLT trading infrastructure which proponents hope will be faster and reduce reconciliation costs. The project’s leaders say, however, that there are many more questions to answer before those benefits arrive.

“It’s less and less about the technology, actually, as that matures and becomes more production ready,” says Andrew McCormack, vice-president of payments and technology at Payments Canada. “It’s more about the regulatory, the legal, the monetary policy issues.”

It’s less and less about the technology. It’s more about the regulatory, the legal, the monetary policy issues

For example, Mr McCormack says, brokers needed digital cash in order to pay for securities within the distributed ledger system in the pilot. The most technically straightforward option was to give them access to funds issued by the central bank. A previous phase of the Jasper project had already made this digital cash available to major banks. However, Mr McCormack says giving it to brokers would have “crossed the chasm and literally broke our own bylaws and, in actual fact, laws”.

Brokers do not typically meet the balance sheet requirements that banks have to pass in order to gain access to central bank cash, in what is called the high-value payment system, explains Mr McCormack. It raised the question: “How do we get the cash, on-ledger, to those who are doing the equities trades to facilitate the magic of what this platform can give us?”

Ultimately, the team found a technical solution by giving different levels of access to cash and credit to different participants. The ability to set rules like this is a key advantage that a private DLT platform has over bitcoin-style public blockchains, which give everyone equal access. A private platform of this kind can be built to follow existing banking rules — maintaining the distinct roles of the central bank, commercial banks, and brokers.

Even with this capacity, Mr McCormack still believes regulatory changes will eventually be required to facilitate any move to DLT. These legal questions need more attention. “Otherwise you’re just building TV on the internet,” he says. “We are trying to figure out a way to do this better.”

The Bank of Canada is not yet engaging with this part of the problem. “The bank has not considered making regulatory changes in order to facilitate a change to DLT,” says Mr Hendry.

“There’s a tremendous amount of governance,” says John Lee, managing director of enterprise innovation and product development at the TMX Group. The digital cash-for-equity swap might seem simple, but managing risk and ensuring ironclad reliability are not.

Project Jasper simply proved that such a system could function. Whether it could perform at scale and meet security, resilience, and credit-risk standards remains an open question.

Is the cost and disruption worth it? That’s exactly what we’re thinking about

“If you truly want to put this into production and scale it up, you have to deal with the non-glorious elements,” says Mr Lee. “There needs to be a reason that DLT was the best technical solution for that use case.”

For Mr McCormack, finding those truly useful applications means deciding which parts of a nation’s financial markets’ infrastructure ought to be included in a DLT system. The Jasper pilot was limited to securities settlement. A future system might incorporate other steps in a securities trade; other assets, like derivatives or bonds; or integrate with trading systems in other countries. The Canadian experiment simultaneously demonstrated the need to consider these more-complex applications, and the difficulty of bringing them to fruition.

“If you are too narrow, it is tough to find the business case,” says Mr McCormack. “It’s more and more obvious to us now that we need to be ambitious in scope.”

In the end, Mr McCormack believes the merit of any switch to DLT should be judged on a cost-benefit basis. “Is the cost and disruption worth it?” he asks. “That’s exactly what we’re thinking about.” 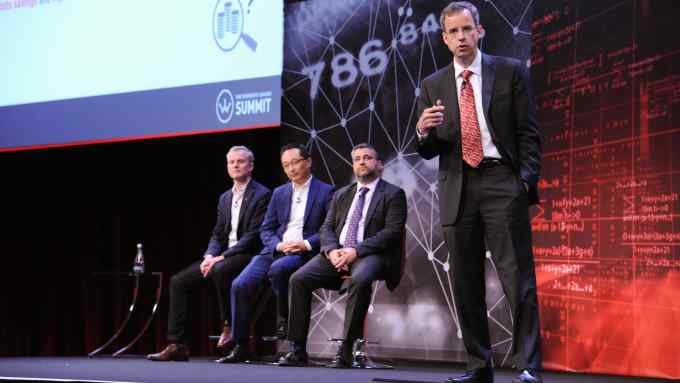