Where to plunge into the world’s best natural spas

Midway through their cross‑country trek – in search of… what? Adventure, escape, hope, happiness? – Dennis Hopper and Peter Fonda’s characters in Easy Rider make a little stop off near Taos, New Mexico. They are there to visit a hippie commune, but soon pick up a couple of girls with whom they ramble down to the banks of the Rio Grande, to a hot spring amid the piñon and cottonwood trees, for a bath and a reprieve from the dusty rough road trip along Route 66. The scene that follows is easily the most exuberant, hopeful and happy – if all too fleeting – moment in the movie; a scene so uplifting that it raises the question: is this what the guys had been and will continue to be searching for all along?

All these years later, we escapists, adventurers and dreamers – American and otherwise – still seem to be in search of that same feeling. And even that same hot spring: earlier this year, pilgrims on the path to Manby Hot Springs were surprised to find that access to the site of that Easy Rider scene is not as easy as it was in the film (approach by car is restricted and the only way in is to float or walk a few miles downriver from the John Dunn bridge).

But though Manby is out of bounds, there is still no better place on earth to go in search of geothermal goodness than here in northern New Mexico, its ancient volcanic field positively littered as it is with happily percolating hot springs. A stone’s throw up the Rio Grande gorge – an 800ft-deep groove in a millions-of-years-old lava flow – sits Black Rock, a series of tubs right on the river, ringed with black basalt pumice stones, and anywhere from bathtub to hot-tub temperature depending on the height of the river. In spring, after the heavy rains, it can wash the site away almost entirely. Above, the knobbly cliffs, yellow and blackened at the edges, look like olive oil cake charred in the toaster, and the autumn foliage is a-glow – superb views you will share, if you visit, with a cross-section of both typical bathers and visitors to Taos: campers, bikers, backpackers in search of the hippie mecca imagined by Hopper here.

Twenty miles south along the now-extinct volcanic chain, near the massive Valles Caldera – a 13-mile-wide meadow where 50,000 years ago one of America’s supervolcanoes exploded itself into a massive crater – there is a profusion of geothermal activity. And, thus, hot springs, including the great McCauley, Jemez, Spence, and perhaps the most dramatic of them all, San Antonio. After a rumble along five miles of fire road (weather permitting, when it is not a slosh of snow and ice), and a hike along a stream, through a pine forest, and up one side of a canyon, intrepid bathers will find tubs set into the near-cliff side of the canyon, arranged in descending order of heat from near-scalding down to a mossy-cool plunge. Here the baths are big (they need to be to accommodate the relative crowds who make it, despite the remoteness) but the views are astonishing; Lord of the Rings-majestic – which is fitting for the handful of wizardly-looking folk around.

These days, wellness and healing – and our collective pursuit of them – have become battlegrounds for discourse, at least in America, on which we need to demonstrate political biases and personal branding in every action. Way out here beyond mobile phone service, though, the raging drama around vaccinations and everything else is mercifully a bit muted. And the area is accommodating of every value system, every process of recuperation, from the woo-woo to the most scientific. Crystals, for example, are and always have been very important; the Taos crystal emporium on the main road is a first stop for the moonchildren still trickling in on the great backpacker migrations, and the signature treatment at El Monte Sagrado hotel spa features a staurolite particular to the area here, called a “fairy cross” for its oddly gothic twinned perpendicular crystals, piled upon one’s back and neck to impart energy.

Sweat lodges, too, are a fundamental aspect of the culture; there are a variety available even if you are not an initiate invited to a pueblo ceremonial sweat. Medicine ceremonies, of the psychedelic-therapy and religious-spiritual variety, are in the offing for the emotionally adventurous. So too is the over-the-counter herb native to Taos called osha, which has been used to treat illness for millennia (by both humans and bears, giving it its alternative name: “bear root”). In New Mexico, you really can pick your poison – or rather, your cure.

I have come here in search of solitude. But I have wandered out of doors for something that might also be good for me: being away from my phone. And there is a feeling here, everywhere, that health itself is just in the air – in the feathery-light high-desert atmosphere – and in the dirt too (so powerful is the traditional belief in the healing properties of the stuff at Chimayo that it has become known as the “Lourdes of America”). The Carson and Santa Fe national forests are perfect for little forest baths. And I have even stretched that idea a bit, wandering deep into small wildernesses – places that qualify as badlands for their utter lack of infrastructure: roads, electricity, anyone to call if you twist an ankle – wandering in the ancient sea beds of the state among the beautiful boulders piled this way and that. But get any distance out into the desert here (as any desert anywhere), and you are immediately, intensely aware of the preciousness of water, the sacredness of the rivers and streams that come tumbling out of the mountains. You understand why a hot spring would be a holy place, why the conquistadors from Spain believed them to be fountains of youth, and why the water itself has been received as manna from the gods.

We still take it that way. Even if the science is ambivalent about the health benefits of the liquid, thick with heavy metals (it isn’t bad for you, that’s clear), the way we bathe is perhaps the most universally devotional activity worldwide.

Or this is how you get to thinking, anyway, when you are sweating out the toxins in a scalding spring at Ojo Caliente. Caliente is the oldest formal spa to be built on a hot spring in America in order to harness its goodness. Like many grandes dames, Caliente is also deserving of a bit of rejuvenation. Last year, there was a fire in the original building, which dates back more than 150 years, but all of the great stones of the structure were spared and have been reincorporated in the rebuild – which, as the staff say, nods more toward Aspen-style luxury than the previous incarnation. The team also discovered new springs in the process of renovating, and these will be organised into very natural tubs; just you in a divot in the rocks with hot water bubbling up to your chest.

Not that there is really any way to improve on the existing baths, which may be my favourites anywhere. Maybe it is for the conspicuous lack of sulphur, and thus odour, in the water? Like all the springs in the area, these are super-rich in lithium, which is meant to be relaxing – a cure, even, for depression. Caliente has named its pools for the predominating emollients: the soda pool “to aid digestion”; the iron pool “to aid your immune system”; and the arsenic pool, “believed to relieve stomach ulcers, and arthritic pain and heal skin conditions”.

There is also a mud pool where you can slather yourself with exfoliating goop, dry out and go back to bath-hopping all over again. The restaurants and accommodations at Ojo Caliente have consistently improved over the past several decades; but even if there are a manicured garden and new suites with private cliffside tubs, you can feel some hesitation in the retreat’s reimagining of itself – wondering how far to go in primping, in making modern, luxurious structures, versus how much they can leave this wondrous and surely sacred place as natural as possible.

There is nothing raw or rudimentary about Caliente’s cousin, the Ojo Santa Fe. This very polished property south-west of town (formerly Sunrise Springs), with its three recognisable brick-rimmed tubs sitting astride a natural pond in a cottonwood grove, could as easily be a resort in Palm Springs, or Switzerland for that matter; and I mean that as a compliment. The thermal and saltwater pools are as well-appointed as any spa in the Alps, and the communal feeling of our pursuit of the cure much the same too.

On the other side of town, the very grand, and growing, Ten Thousand Waves adds Japanese-style spa practice to the aesthetics and surroundings of New Mexico to make a sum greater than those parts. In one of the treatment rooms here, or, indeed, sitting by the communal hot pool, or in a private bath area, you could be forgiven for imagining yourself outside of Kyoto, or a million miles away, in a forest of enchantment.

HTSI
Soak up the hot springs in Nozawa Onsen That feeling is what led Archbishop Lamy – the famous source material for Willa Cather’s Death Comes for the Archbishop – to seek a place of remove from his activities in Santa Fe. In the late 19th century, Lamy built himself a chapel retreat in the hills north of town where he could meditate away from the Wild West shootouts (and the emerging tourists who came in search of the sort of dude-ranch glamour then made fashionable by Edward S Curtis, before Ralph Lauren did it again a hundred years later). For the past five or so years, the California-based Auberge Resorts Collection has been at work on this site (and restoring the chapel) to create Bishop’s Lodge, a resort that will open this year and would not be out of place in Jackson Hole or Sun Valley – complete with an Orvis store on “campus”, sitting beside a stream where guests can learn to fly-cast for trout.

Bishop Lodge’s main luxury resort competition in the area is the great Four Seasons north of town, first converted to a lodge by an Ohioan, Elizabeth Egan, who was so charmed by the site she called it Rancho Encantado. Her famous friends and guests – from Peter Sellers to Maria Callas, the Dalai Lama to Johnny Cash – were too. And, on a cool autumn evening, stumbling out of a spa treatment, or sitting in the healing hot tub to watch the New Mexico sunset turn the clouds to cotton candy, feeling close to happy, or even healed, modern guests might also get a pretty good idea what Egan, Lamy and those Easy Riders found and never forgot out here. 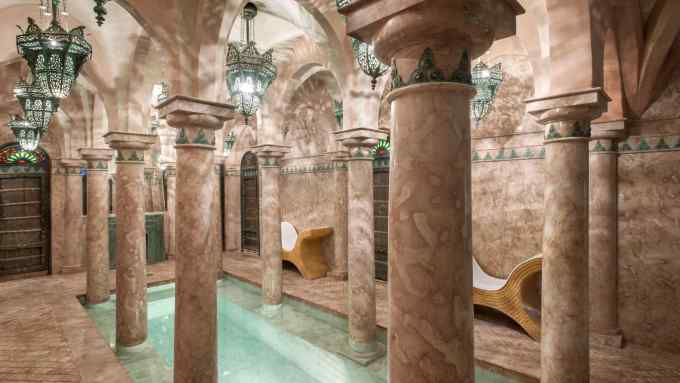