How To Spend It in... Paris

We’ll send you a myFT Daily Digest email rounding up the latest Paris news every morning.

I’ve been in Paris now for almost two years. Before that I lived practically everywhere – I went to England for boarding school, Princeton for university, back home to Paris for a bit, then to Mexico City and London, where I lived for 15 years. So in a way I’m a bit of a tourist in Paris – except that I’m French, of course.

These days I live in Saint-Germain-des-Prés, on the Left Bank of the river Seine. I grew up nearby in the 7th arrondissement, but Saint-Germain has a different feel. It’s full of local shops that each have their own speciality – a crémerie for cheese, a stall for fresh fish – and there’s a market every Sunday on Boulevard Raspail. Everything in Paris is organised around the river. By walking along the quays, you really get to experience all the neighbourhoods. If I want to be around nature I’ll go to Jardin des Tuileries, where I take Lily, my dog, for a walk almost every day.

One of Paris’s great rituals is starting your day at a café. In other cities you usually go for a coffee to catch up with friends. But in Paris you go on your own. Half the tables at a café will be full of people reading or writing. It’s a habit I’ve returned to since moving back here; Café de Flore needs no introduction but I love going because it’s so close to my house. And there’s a real tradition of the habitué in France – if the waiters don’t know you, they give you the worst table. Come three days in a row, and they’ll move you somewhere better. Then, when you go all the time, you get a table that’s kind of your own.

Another favourite café is La Palette. I used to go when I was 16, when I moved back to Paris for my International Baccalaureate. It had famous waiters back then; there’s a painting of them on the wall. When I left for university, they said: “Go to America, but you have to come back!” Parisians have a reputation for being obnoxious, but I don’t find that. There’s a charm about how much they love their city.

For French food, I love Le Voltaire, where I have crab salad, followed by fish. And there’s Chez l’Ami Louis, where I’ll order roast chicken – sounds simple, but it’s really good. More festive is Lapérouse, which has been open since 1766; Colette’s novel Chatte was written at one of its tables. For something sweet I’ll go to Cédric Grolet’s pâtisserie near Place Vendôme. His apple tart is incredible. There’s also a wonderful tradition of beauty here. People take time for themselves by having a regular treatment – the idea is to be consistent in how you look after your skin. I go for a facial at Maison Sisley each month and I’ll often get a massage from Luca Bagnara. It’s great for your circulation.

Some of the best places for fashion are the vintage stores around Palais-Royal, such as Gabrielle Geppert – I’ve found Chanel belts, Alaïa dresses and ’70s Chloé silk gowns. Or I go to Le Bon Marché, Paris’s main department store, because it’s easy. But it also stocks Alexandra Golovanoff, who does beautiful sweaters, and jewellery by Charlotte Chesnais. I also love Molli, which makes delicate knits from fine virgin wool.

For interiors, I go to the flea market in Saint-Ouen. A lot of the pieces I’ve found are Italian – chairs by Paolo Buffa and my marble Mangiarotti dining table – but I also have a lot of French rattan furniture. Often I’ll get furniture upholstered – Simrane sells beautiful fabrics from India. And I fill my home with flowers from Eric Chauvin. His arrangements are amazing and never too perfect: you see them at events for Dior, Louis Vuitton and Chanel.

If I’m not at the market, I like to spend my weekends at the design galleries on Rue de Seine – including Galerie Jacques Lacoste, which focuses on 20th-century furniture. Further down you’ll find Galerie Kreo, a limited-edition lighting store, and the contemporary art gallery Kamel Mennour. But most of all I love going to Opéra Comique, the 18th-century theatre that Bizet’s Carmen was written for.

HTSI
How to spend it in Cornwall 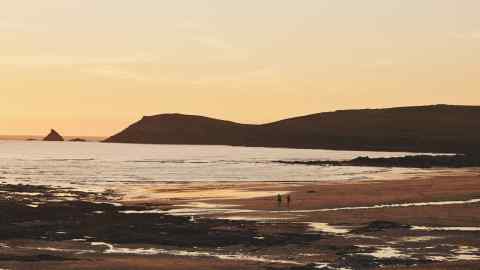 I don’t usually stay at hotels in Paris, but Hôtel de Crillon, where we have a great Sisley spa, is exemplary. It’s huge, full of history and it’s on the Place de la Concorde. Opposite is JK Place, furnished with pieces found at antique stores and flea markets. Another cool place is Hôtel Particulier in Montmartre, Paris’s smallest hotel.

Paris is going through a really interesting time – the young have travelled a lot, and it’s becoming more international. But it’s kept its French roots – the love of a café, a long lunch hour and its habitués. All those things remain, it’s just taken on some other sides too.