A $91bn Nordic asset manager has dumped its investments in ExxonMobil, Chevron and miner Rio Tinto in protest over their lobbying on climate change issues.

Storebrand’s move is thought to be the first example of a big investor explicitly divesting from oil producers and miners for alleged lobbying against tougher environmental standards.

“Climate change is one the greatest risks facing humanity and lobbying activities which undermine action to solve this crisis are simply unacceptable. The Exxons and Chevrons of the world are holding us back,” said Jan Erik Saugestad, chief executive of Storebrand.

It has also offloaded Southern Company, the US energy provider, and BASF, the German chemicals group. It had around $27.2m invested in the five companies.

Climate lobbying is emerging as a new battleground for institutional investors as concerns grow that companies and the trade organisations they are members of are attempting to influence governments to halt the shift away from fossil fuels.

This year, a majority of shareholders at Chevron backed a resolution requiring additional climate-related lobbying disclosures by the oil major.

Overall, average support for climate lobbying proposals globally stood at 47.2 per cent this year, up from 21.4 per cent in 2019, according to Proxy Insight, the data providers.

“We expect that our peers will also adopt new policies like this as part of a logical progression in global fossil fuel divestment,” said Mr Saugestad.

He added that Storebrand, one of the first asset managers to establish a sustainable investment team, would maintain pressure on other fossil fuel reliant companies to change their behaviour. 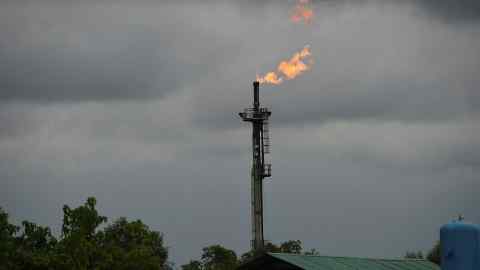 “BP, Shell, Equinor and other oil and gas producers cannot rest easy and continue with business as usual. We need to accelerate away from oil and gas. Renewable energy sources, like solar and wind power, are readily available alternatives,” he said.

Storebrand has also divested from an additional 22 companies that do not comply with a new enhanced climate policy which was unveiled on Monday.

It has sold holdings worth about $17.9bn including positions in Japan’s Mitsui, Kansai Electric Power (Kepco) and Chubu Electric Power (Chuden), which have been judged as too slow to exit from coal.

“Investors need to be responsible and proactive in accelerating the green transition. We are not passive actors awaiting the pending systemic harm that climate change will unleash on ecosystems, societies, and economies,” said Mr Saugestad.

Chevron said that its board of directors was considering a recent shareholder proposal calling for increased disclosure on climate change related lobbying and it was working to take appropriate actions to address investors’ concerns.

Southern Company said that its board and management actively engaged with a variety of investors to understand their thoughts about its business and would have provided Storebrand with that same opportunity.

ExxonMobil said that it was focused on the dual challenge of meeting the growing demand for energy and minimizing the risks of climate change.

Rio Tinto and BASF did not respond to requests for a comment.