After a long period of sobriety, designers are embracing hedonism — and bucket hats, again

Everything is acid. The menswear shows for Spring/Summer 2019 have been saturated in neon. In most collections, designers have used acid in the intense colours, but look further and there are references to 1980s acid house — floral prints, raver’s knits, bucket hats.

In London, Kent & Curwen used graphics from The Stone Roses — the acid house-adjacent band — on T-shirts, while models walked in leather cagoules. Milan was full of neon suits, Versace showed floral shirts that clung to the body as though sticky from a night of dance floor sweat. At Fendi there were bucket hats, the raver’s favourite. At Prada, pants and knits were in vivid colours, floral print rollnecks had raver hippy idealism, while acid digital prints of cities and naked bodies were hallucinogenic.

The connection to club culture was more overt at MSGM, especially in pieces such as acid green or orange nylon shirts. Massimo Giorgetti, the label’s founder, grew up in the resort town of Rimini, which was celebrated for its clubs in the 1980s and 1990s. “Fluoro colours are so linked with that time of my life,” he said, “with its music, art and culture, but also its amazing energy. It was about the positive attitude, the carefree spirit, the irony, the fun.”

Many designers are too young to have been there the first time. Craig Green was born in 1986, when the acid house sound was first emerging. After his triumphant show at Pitti Uomo in Florence, Green did not mention music; he was thinking more of the effect. “I like that when you put red on top of blue, it looks like it’s vibrating,” he said of tops and pants made using Nike’s Flyknit fabric. “You can create a visual effect with not really anything.”

Away from the catwalk, there is also much acid. Cult T-shirt brand Cactus Plant Flea Market has hand-drawn smiley face print T-shirts, with four eyes instead of two, as well as one-off smiley face sweatshirts to celebrate Kanye West’s new album Ye. Palace Skateboards, a brand steeped in rave history, has logo T-shirts overprinted with futuristic orbs to look like old club flyers.

But why now? There were flashes of fluoro last season at Balenciaga and Prada, brands that are often early with a trend. Or maybe it’s the influence of Her Majesty The Queen, whose colour palette has been exceptionally fluorescent in recent weeks. It could also be escapism. After Brexit and the election of Donald Trump, the catwalk became a place of protest, with political sloganeering and calls for equality and love. Surprisingly, neither Brexit nor Trump have been derailed. Pure blinding hedonism is much safer territory.

Meanwhile, millennials are finding their own place within the subculture. After his SS19 show in London, 27-year-old Charles Jeffrey talked about the importance of raves, but he is no longer interested in debauchery. Today, he speaks of the sense of community and the energy around the music.

Last time, the acid-house look slipped quickly into parody, ruined by an overload of smiley faces. The question remains: how long will this trip last? 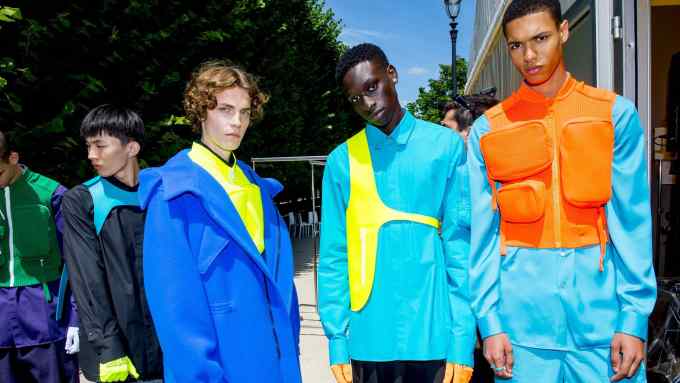